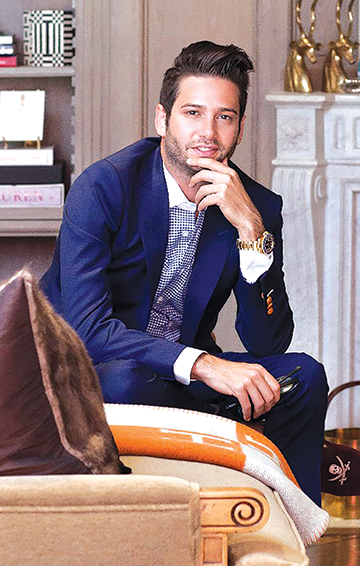 Los Angeles Museum of the Holocaust will honor Josh Flagg, star of Bravo’s hit series “Million Dollar Listing Los Angeles,” and board member Patsy Palmer and her husband, Arnold, at its annual gala at the Beverly Hilton Hotel on Oct. 30. Melissa Rivers will host.

In addition to starring on the Bravo show, Flagg is one of America’s most successful and sought-after luxury real estate agents, having completed more than $1 billion in residential real estate sales in the past decade. He was recently named one of the top 30 realtors in Los Angeles by The Hollywood Reporter. The grandson of Holocaust survivors and a board member at Los Angeles Museum of the Holocaust, Josh lives with his husband, Bobby, in Beverly Hills.

Patsy Palmer holds a Ph.D. in child psychology and is a docent at the Los Angeles County Museum of Art, and a docent and board member at Los Angeles Museum of the Holocaust. Arnold Palmer was an institutional stockbroker with Sutro & Co. for over 50 years and continues to work with individual clients. The Palmers live in Windsor Square.

Awards will be presented by Carrie Brillstein and Ada Horwich.

The program will include a preview by USC Shoah Foundation Finci-Viterbi Executive Director Stephen Smith of a “Dimensions in Testimony” interactive biography featuring Holocaust survivor Renee Firestone, who will also be present. The exhibit will debut at Los Angeles Museum of the Holocaust in 2020. “Dimensions in Testimony” enables people to ask questions that prompt real-time responses from pre-recorded video interviews with Holocaust survivors and other witnesses to genocide.

The Beverly Hilton Hotel is located at 9876 Wilshire Blvd. For information, visit lamoth.org. For tickets and sponsorship opportunities, contact Mann Productions at (424)832-7434, or mann@mannproductions.net.