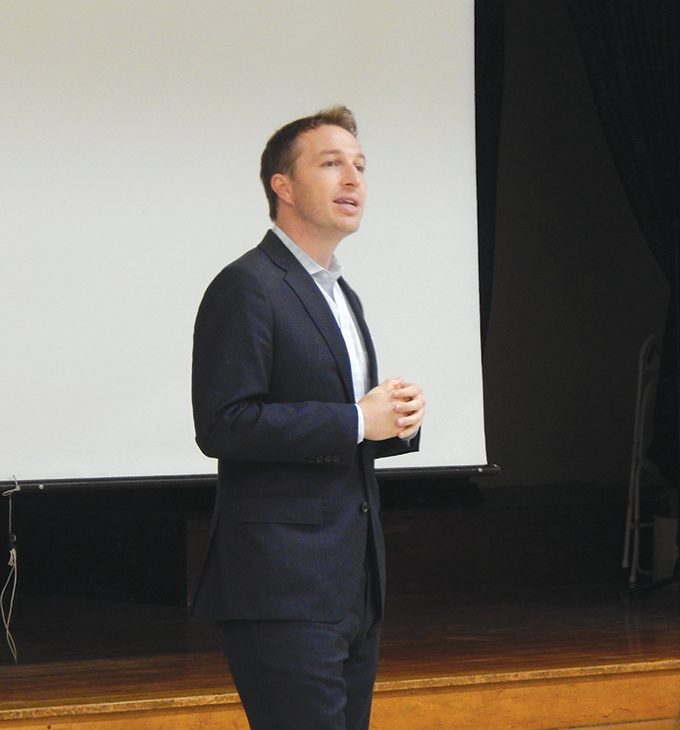 By the end of this year, the Los Angeles Unified School District Board of Education may have signed off on a new middle school to accept students from the Hollywood, West Hollywood and Fairfax areas.

The plan for the new school, tentatively called the West Hollywood-Fairfax Academy, will be submitted to the board on Nov. 15 so it can be voted on during the Dec. 3 meeting. If approved, WHFA will begin operating in the fall of 2020 with a class of 125 sixth-grade students, five teachers and an administrator. By 2022, the school is expected to enroll 360 students – LAUSD officials included five students lost to natural attrition each year – and two administrators and 16 teachers.

At a public outreach meeting at Fairfax High School on Oct. 21, LAUSD Board Vice President Nick Melvoin, 4th District, said a new middle school is a desire of many parents in the area who often enroll their children in charter or private schools. Melvoin said that only 5% to 15% of West Hollywood middle-schoolers attend LAUSD schools.

“There’s no more important decision than when you send your kids to school, but we’re confident that L.A. Unified can be that place,” Melvoin said.

WHFA aims to help recapture some of the middle-school students who come from six local elementary schools: Melrose, Wonderland, Cheremoya, West Hollywood, Rosewood and Gardner. Under the proposed plan, students from those elementary schools will get first priority for admittance to WHFA, followed by students who live in the resident boundaries for those six schools but don’t attend them, students in the Local District West boundaries, students in LAUSD boundaries but don’t attend one of the feeder schools, and students who live outside of LAUSD boundaries. If there are more applicants than spaces available, a lottery would be used within each category to choose which students would be offered a spot.

“This truly is an attempt to reclaim those families [from the six feeder schools and] increase the district’s enrollment by offering another choice,” said Autri Streeck, Local District West elementary director.

The final location has not been selected, but has been narrowed down to two sites along Fairfax Avenue: Fairfax High School, which has a street address of 7850 Melrose Ave., and West Hollywood Community Day School, located at 1049 N. Fairfax Ave.

LAUSD is soliciting feedback on the public’s preference, as the two locations offer different advantages and disadvantages. For instance, while the Fairfax High location provides slightly more spaces – 12 against 10 available at the WeHo CDS site – and access to athletic and recreation facilities that WeHo CDS lacks, the preteens from WHFA would be sharing facilities with older students at Fairfax High.

One parent in the room raised a question about the potential of the older teens bullying the middle schoolers, though the school district officials at the meeting said the high schoolers could serve as mentors for their younger counterparts. The younger students’ areas would be fenced off from the rest of the campus, and the shared areas, such as the cafeteria, would be used in shifts, further limiting the interactions between middle-school and high-school students.

Once the classes begin, the plan is for students to follow a DREAMS – design, research, engineering, art, math and science – program that also includes cultural instruction to produce not only good students, but good humans, consultant Valerie Braimah said.

“We wanted to make a statement that just graduating kids who are good at tests … that’s the floor, but it’s not far enough,” Braimah added.

Once it’s up and running, WHFA wants to offer everything from accelerated classes to community building and mindfulness programs, as well as classrooms and a campus with ample green space, a home-like environment, and the achievements of students on display for parents and classmates to see. By winning grants initially, then relying on fundraising from parent groups, Braimah told those in attendance the school can achieve its “ambitious” goals and create a school that is “a place where learning is really cool.”

“There’s a lot of excitement and a lot of trepidation about making your kids the guinea pig … But we’re really trying to set up the school so that from day one, it feels the way we all want a middle school to feel,” Braimah said.

There IS another option. The Laurel Cinematic Arts and Creative Technologies K-8 Magnet was approved by the board last June. I am a teacher there and was closely involved with the principal and the rest of the team in developing the proposal. We are currently in our implementation year. Apparently, at the meeting on the 23rd, some disgruntled parents from the West Hollywood area indicated that they were “promised” Laurel as the site for their new Academy. This is news for us. We are in the choices brochure, we have been promoting our Magnet in fairs, and have been signing up families on a daily basis. We are blindsided by this. We were under the impression that our magnet was a done deal. Apparently, there have been shady and secret deals happening behind our backs. We have played fair. Now it’s time for other outside and hostile forces to play fair. In a time of limited resources, I think it is outrageous to divert funds to a new middle school when there are two options already available (Laurel and Bancroft). I am against Laurel being handed over to this other group. I am also against the slander against our principal by the very person who has been orchestrating these secret plans.

Correction.. the meeting was on the 21st.