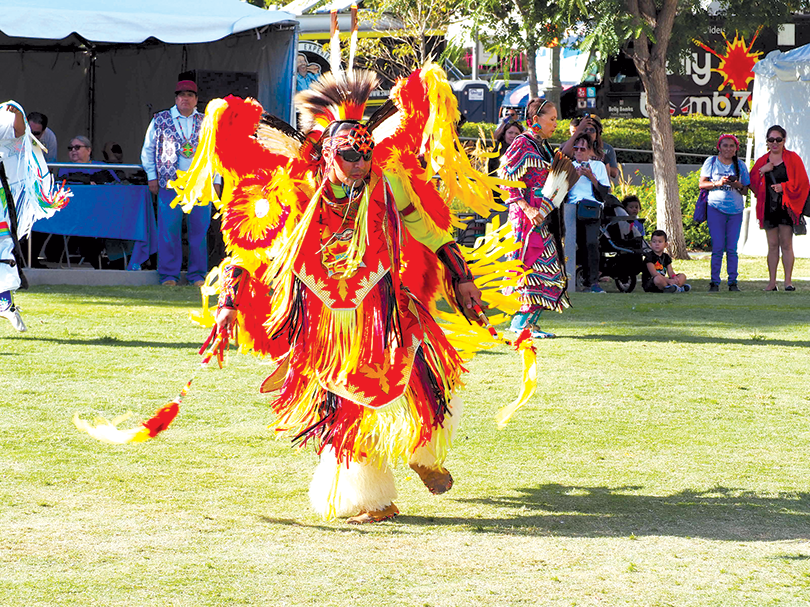 Indigenous Peoples Day will include entertainment and presentations on Native culture. (photo by Luke Harold)

Los Angeles City Hall and Grand Park will come alive with musical performances and tributes to Native heritage and culture on Sunday, Oct. 13, during the city of Los Angeles’ second-annual observance of Indigenous Peoples Day.

The celebration runs from 4 to 9 p.m., and it is being held a day before the actual Indigenous Peoples Day, which was designated by the City Council in 2017 as the second Monday of October, replacing Columbus Day. Los Angeles City Councilman Mitch O’Farrell, 13th District, spearheaded the city’s effort to establish Indigenous Peoples Day and said the celebration is being held on a Sunday this year to allow more people to participate.

“Indigenous Peoples Day is a time to celebrate all native cultures, but everyone is invited,” said O’Farrell, a member of the of the Wyandotte Nation. “Hosting the talented Xiuhtezcatl and A Tribe Called Red this year will help elevate the importance of honoring the contributions and sacrifices made by our ancestors while putting the charade of Columbus Day and the false narrative that he personifies in the past where it belongs.”

A prelude to the observance will be held today, Oct. 10, at 10 a.m. on the South Lawn at City Hall, 200 N. Spring St. O’Farrell and members of the Los Angeles City-County Native American Indian Commission will join Tongva Chief Anthony Morales for a prayer and blessing of the land. Entertainers Vegas and Redbone will also participate, and the public is invited.

The city of Los Angeles became the largest municipality in the nation in 2017 to replace Columbus Day with Indigenous Peoples Day, joining San Francisco, Denver, Seattle, Anchorage, Portland, Albuquerque, Minneapolis, Berkeley and Santa Cruz. Many other large cities such as Detroit, Tulsa and Long Beach, as well as the county of Los Angeles, have followed Los Angeles’ lead.

Although the Indigenous Peoples Day celebration is on Oct. 13, the next day is a city and county holiday, with most offices and departments closed. Columbus Day, on Oct. 14, is still a federal holiday.

“Celebrating Indigenous Peoples Day is an act of resistance and love,” Xiuhtezcatl said. “As an artist, performing on stages worldwide gives me the platform to represent my community and my ancestors, and to come together to celebrate the beauty and diversity of indigenous peoples through music and culture gives me hope in our peoples power to build our future.”

“Our community has fought hard for this annual celebration, and for this platform to uplift the issues, talent and contributions of Native Americans in Los Angeles,” added Chrissie Castro, chair of the Los Angeles City-County Native American Indian Commission. “Through this event, we are paying tribute to the city and nation’s first peoples, the Tongva, and rejecting the violent, genocidal man that is Columbus.”

O’Farrell and the commission are using Indigenous Peoples Day as a call to action to persuade federal lawmakers to also abolish Columbus Day. The councilman hopes people enjoy themselves while also considering the adversity Native peoples have faced over the years.

“I want people to realize that Indigenous Peoples Day is a day everyone can celebrate, regardless of tribal affiliation, regardless of Native American heritage or not,” O’Farrell added. “At the same time we are celebrating, it’s a moment to reflect on the struggles.”