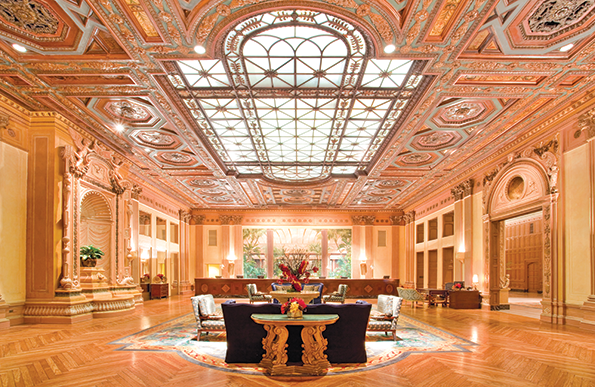 The hotel, which the city declared a historic-cultural monument in 1969, has hosted dignitaries such as Martin Luther King Jr., Nelson Mandela and President John F. Kennedy, as well as events like the 1960 Democratic National Convention.

“This hotel is interesting because it has so much history … we call it a museum-hotel,” said Ruth Ren, digital strategy manager for the Biltmore.

Located near Pershing Square, the Biltmore matches a prime downtown location with a high-quality guest experience and ample meeting space for a variety of events. The rooms are spacious and comfortable, and the Biltmore features 70,000 square feet for everything from conventions to weddings.

The hotel also offers a variety of amenities, including a 10th floor club lounge that hosts a continental breakfast in the morning and an evening happy hour event with wine, beer and hors d’oeuvres. Smeraldi’s Restaurant, an Italian eatery, offers breakfast and lunch for guests, and Rendezvous Court, the hotel’s former lobby, serves afternoon tea on weekends.

Many of the amenities also pay homage to the hotel’s history. The pool and hot tub still feature the blue tiles and brass railing from the 1920s, and the Biltmore’s Gallery Bar and Cognac Room features a menu that pays homage to the hotel’s Prohibition-era speakeasy located in the Gold Room.

The Biltmore has also played a large role in the entertainment industry. Not only has it hosted eight Academy Award ceremonies, but numerous television shows, movies and music videos have used the hotel’s ornate architecture and décor for filming. “Ghostbusters” prominently featured the Biltmore, as have music videos from Taylor Swift, John Legend, Jennifer Lopez, and Meek Mill and Drake. More subtly, the hotel has also served as a filming location for movies like “A Star is Born” and “Fight Club.” There are even rumors that the Oscar statuette was designed on a cocktail napkin in the Biltmore.

Jimmy Wu, the hotel’s general manager, said his job is to keep guests and employees happy so the Biltmore can continue to make history.

“I am so passionate about the Biltmore, not only due to its history but also our storytelling now and then,” Wu said. “Actually, I am everyone’s servant.  I would like to be the hotel’s storyteller to share all the exciting and amazing moments with our guests.”