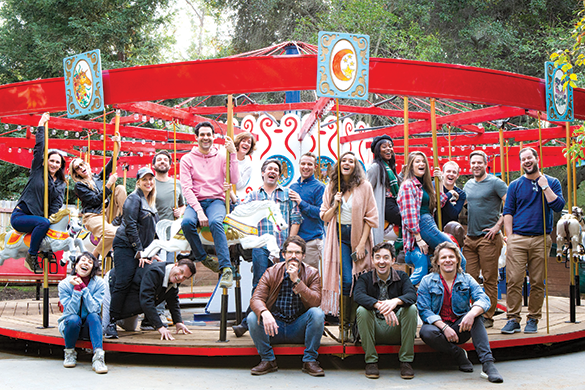 The Groundlings Theatre and School, a nonprofit improv and sketch comedy theater, is kicking off a month-long series of events for its 45th anniversary with a recognition from the Los Angeles City Council on Friday, Oct. 11.

The City Council will host a special presentation for the group. Current company members and alumni, including Laraine Newman and Jordan Black, will receive the honor, and a seven-minute segment with speeches and a short clip on the history of the Groundlings will be shown.

“Forty-five is certainly a milestone, and we have had such huge success rising through the years from our school with so many people moving on to great careers in comedy,” said Groundlings Theatre Managing Director Heather de Michele. “It is wonderful that the city is taking an opportunity to say, ‘This is really one of L.A.’s most exciting artistic institutions, and they have lived through many decades and are still thriving and relevant today.’”

Councilman Paul Koretz, 5th District, is also expected to give a speech in recognition of the group.

“I will be honoring the Groundlings in council to recognize their 45th anniversary of artistic achievement in theater, improv and sketch comedy … Coincidentally, it is also a special place for me because it is where almost exactly 35 years ago to the day, my wife Gail and I had our second date,” Koretz said. “But the celebration is really about the 45 years of good work by the Groundlings.”

The Groundlings was founded in 1974 by Gary Austin and has been a comedy training ground in Hollywood for years. Countless comedians from television and film began at the Groundlings, including Melissa McCarthy, Will Ferrell, Maya Rudolph, Kristen Wiig and more.

For the Groundlings, Friday marks the beginning of numerous events that are happening throughout October in celebration of the anniversary.

A weekly panel series with main company members and alumni will take place every Wednesday at 4 p.m. The Oct. 16 panel will focus on diversity in the industry with Lyric Lewis moderating. Ariane Price will moderate the Oct. 23 panel, which will focus on SNL alumni. The Oct. 30 panel, moderated by Patty Guggenheim and Annie Sertich, will focus on women at the Groundlings. The panels are free and open to the public.

On Oct. 21 and 22, the Groundlings will host two sketch comedy extravaganzas. The first night will celebrate cast members and performances featuring iconic sketches of characters that were created at the theater from 1974-99. The second night will focus on 2000 to the present. Groundlings alumna Deanna Oliver will direct the first night, and current main company member Lisa Schurga will direct the second night. Each performance will begin at 8 p.m. Tickets are $75, which includes appetizers, cocktails, desserts and a celebratory toast with the cast.

The Groundlings Theatre and School is located at 7307 Melrose Ave. For information, tickets or to RSVP for panels, visit groundlings.com/45anniversary.