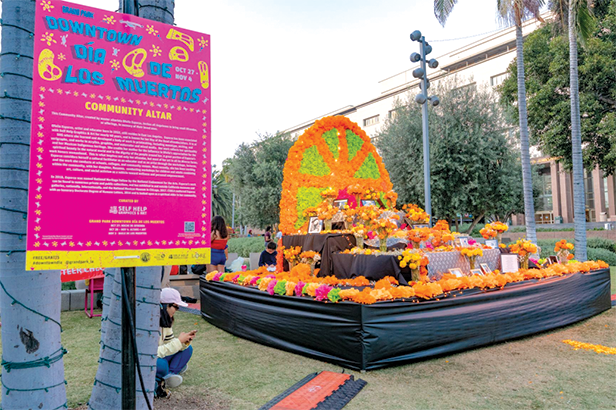 Grand Park will bring Día de los Muertos — Day of the Dead — alive with free festivities from Oct. 26-Nov. 3, including altars, events and performances. The seventh annual “Downtown Día de los Muertos” expands to include the newly renovated Music Center Plaza as well as a one-night only “Selena for Sanctuary” concert. Raising awareness of social-justice issues concerning immigration in Los Angeles, the concert will feature an all-female lineup of Los Angeles-based artists, including Empress Of, San Cha and Ceci Bastida. “Grand Park’s Downtown Día de los Muertos” is a community-wide event that upholds this cultural tradition, remembering those who have passed away and inviting all Angelenos to experience and learn about the observance.

While the Día de los Muertos commemoration takes place on Nov. 2, Grand Park and the Music Center’s remembrance is a nine-day art and performance gathering designed to honor people, places and ideas that merit reverence, support or tribute. Throughout the entire nine days, visitors can stroll among 35 altars organized by Self Help Graphics and large-scale art installations curated by LORE Media and Arts.

Additionally, the Music Center will host Día de los Muertos-themed film screenings on its plaza. In partnership with Self Help Graphics, Grand Park’s commemoration begins with the ceremonial Noche de Ofrenda, or Night of Offerings, on Oct. 26.

The joint event of reflection and remembrance will unveil a master altar ideated by artist and educator Ofelia Esparza, a 2018 NEA National Heritage Fellow; both she and her family continue to be instrumental in preserving and conserving Día de los Muertos in Los Angeles. Throughout the evening, and the entire nine days, park-goers are invited to contribute to this community altar as part of the reflective remembrance. The ceremony will also include dancers representing Aztecan, Oaxacan and Michoacán traditions as well as performances by Los Angeles-based poets and musicians, including Latin music artist CAVA from East Los Angeles.

“Through our Día de los Muertos programming, we celebrate the spirit of Los Angeles by curating hometown artists with unique identities and viewpoints who reflect the many corners of the county,” said Julia Diamond, interim director of Grand Park.

For information on where Grand Park is located, go to grandparkla.org.