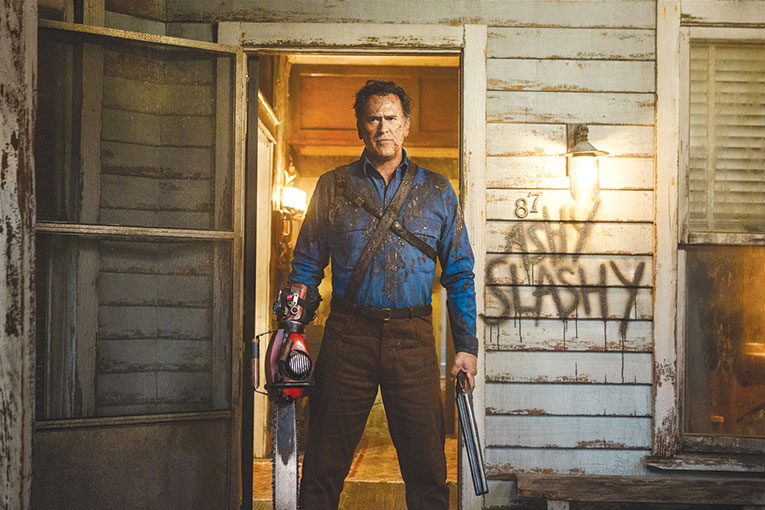 Bruce Campbell reprises his role as Ash in “Ash vs Evil Dead,” one of the 50 best horror films and television series of all time. (photo courtesy of Starz)

Oct. 1 marks the start of the Halloween season. I mean, my decorations are already up. But if you’re slow to get things kickstarted, then here are 50 films and television series worth your time, whether you need a good scare, a few laughs or just some nostalgic feels.

Spotlight: Patrick Stewart as the leader of some white nationalists is a truly horrifying and thrilling experience from rising studio A24, and “Green Room” is never dull as some starving punk rockers must escape a venue filled with hostile bigots trying to cover their own rumps following a murder. But let’s not forget “The Orphanage,” one of the scariest ghost stories that effectively uses sound and cinematography in lieu of excessive visual effects.

Spotlight: So, we finally have a horror-superhero series: “Swamp,” from the producers of “Saw.” Sadly, the big wigs at Warner Bros. decided to can it before the first episode even aired, so we’ll never know how much better it could have been. “The Haunting of Hill House,” however, is a marvelous story with a satisfying conclusion and hope for more as season two ventures into an entirely new anthology story.

Spotlight: OK, so the horror classics are kind of hard to find on streaming services. But I’ll die on this hill: “The Lost Boys,” in all its ‘80s excess and campy lunacy, belongs in our hearts forever. Does it change that game? Certainly not, but it remains a splendid relic of a particular mode of nostalgic storytelling.

Spotlight: Trash The CW’s “Supernatural” if you must, but it will end in 2020 on its own terms at 15 seasons. That’s impressive. The episodes weren’t all winners, but teaming with the Scooby gang was a high, as was a wonderful homage classic Hollywood. In “Monster Movie,” filmed in black and white, the Winchester brothers face a shapeshifter who quite literally enjoys becoming throwback Universal creatures of the golden age. It’s a wonderful bash.

That said, I can’t ignore my eternal love for Tom Hanks as David S. Pumpkins, the most ridiculous attempt to create Santa Claus lore for Halloween. This “SNL” sketch kicks off every October in my home.

*Be warned: Some films and series are more violent and/or disturbing than others.