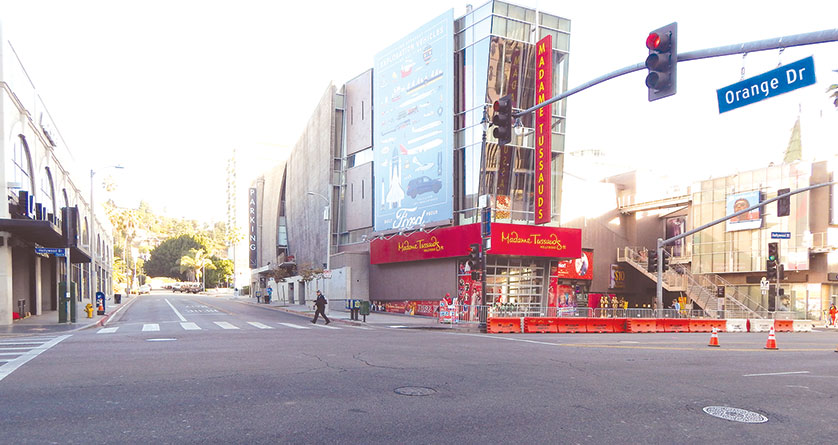 A bicyclist was struck by a vehicle and died on Oct. 25 on Orange Drive, just north of Hollywood Boulevard. (photo by Cameron Kiszla)

Police are seeking information that will lead to the arrest and conviction of a driver who struck and killed a bicyclist on Orange Drive in Hollywood on Oct. 25.

The victim, a woman in her 40s, was riding a bicycle northbound on Orange Drive just north of Hollywood Boulevard at approximately 2:20 a.m. when a vehicle traveling in the same direction struck her from behind and drove away. Paramedics were called and the victim was pronounced dead at the scene.

The woman who was killed was “doing nothing wrong” when she was struck, said Det. Connie White, of the LAPD’s West Traffic Division. The victim is believed to have been homeless, and authorities are attempting to notify her family before releasing her name.

“It’s very unfortunate,” White said. “We are asking for the public’s help.”

White said officers found security camera footage that shows a four-door, silver sedan struck the victim. Authorities hope someone with information will call police. The Los Angeles City Council has approved a standing reward of up to $50,000 for information leading to an arrest and conviction in hit-and-run cases. Anyone with information is urged to call West Traffic Division at (213)473-0234. During weekends and off-hours, call (877)LAPD247.

Ringo Starr statue to be dedicated on Saturday

This was my cousin who was killed. It makes me sick that the person didn’t even stop. Brenda has children who are left broken hearted and family who loved her. She was once a model who lived with a famous rockstar. She was beautiful, articulate, kind and loving before her descent into drugs. I can’t even wrap my mind around how we had to find out about her death. Please if anyone has any info on her death please report it. She deserves the dignity of that.