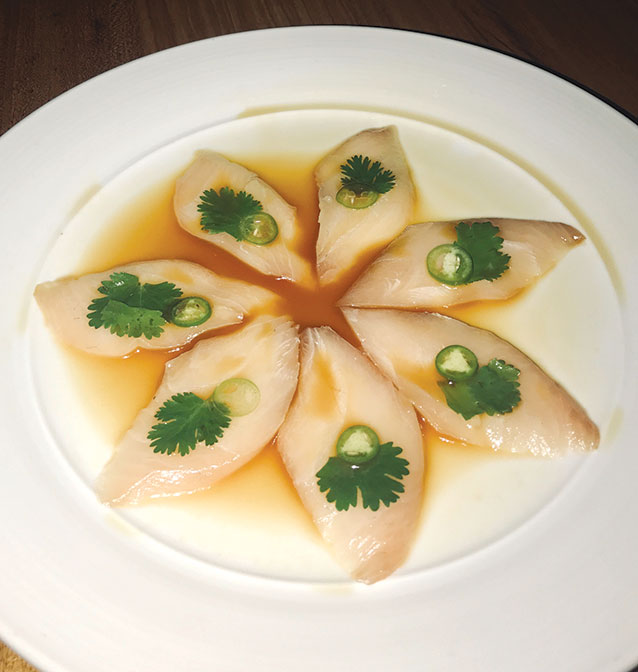 Nobu’s yellowtail sashimi with jalapeño and a sprig of cilantro resembles an artful pinwheel. (photo by Jill Weinlein)

When Nobuyuki Matsuhisa moved from Japan to Peru in the 1970s, he opened his first restaurant offering a menu filled with a fusion of Japanese and Peruvian ingredients. With its success, he later arrived in Los Angeles and opened Matsuhisa. Actor Robert De Niro was a huge a fan of the chef and restaurant, and convinced Matsuhisa to open a similar restaurant in New York City.

Within the last two decades, De Niro and Matsuhisa have remained friends and business partners. Through the years, they opened Nobu Restaurants, named after shortening the chef’s first name. Another fan of Nobu is billionaire and founder of Oracle, Larry Ellison. Owning multiple homes in Malibu, Ellison joined Matsuhisa and De Niro’s Nobu Hospitality Group to help build the luxury restaurant and boutique hotel in his backyard.

The aesthetically pleasing Nobu Malibu opened right on Carbon Beach, with an elegant Japanese minimalist design and a casual Malibu chic vibe. Located next door to the restaurant is the serene 16-room beachfront Nobu Ryokan. Guests who stay at the hotel get preferred reservations at the restaurant.

Besides Peruvian-influenced Japanese food with a Cali spin, Nobu is also known for its creative cocktails. With over 30 Nobu restaurants nationwide, the bartenders have a playful Grand Cordon cocktail competition each year. They enter their best drink recipe, all of which use one spirit as the base. This year, they used QUI Platinum Extra Añejo Tequila, and the winning mixologist, Lanee Kelley, from Nobu Newport Beach, won with her “Mayonaka Sour.” It’s listed on all of the Nobu cocktail menus for guests to experience during October and November.

To celebrate her win, the founders of QUI Tequila recently hosted a multi-course dinner at Nobu Malibu. Guests were invited to meet the founders on the wood deck, which is located off the oceanfront private dining room. Looking south to the shoreline lights, called “queen’s necklace,” we were each offered an old-fashioned glass with an extra-large ice cube and pour of QUI tequila. Taking a sip, I noticed a slight essence of hazelnut, vanilla and butterscotch characteristics.

“It’s a smooth and sophisticated tequila, not the type to down quickly with salt and a lime,” said Pete Girgis, president and co-founder of QUI.

With our drink in hand, we were led into the wood-paneled dining room to take a seat at a large square-shaped table. Plates of edamame beans with crisp garlic chips and yellowtail sashimi with a thinly sliced jalapeno sphere on top and sprig of cilantro were arranged as a pinwheel on a plate. The coolness of the cilantro and spiciness of the jalapeno provided an outstanding balance of flavors.

Another QUI co-founder, Medhat Ibrahim, joined us and shared how this tequila is made in small batches in the highlands of Jalisco, Mexico. Ibrahim, Girgis and the third co-founder, Mike Keriakos, named their spirit from the heart of the word te-QUI-la. “We take the blue agave plants and discard the heads and tails, only using the juice of the heart,” Girgis said.

He shared how this agave is distilled, filtered and redistilled to create the world’s first platinum extra añejo tequila.

When the Nobu food and beverage team were introduced to QUI, they agreed to stock and serve it at Nobu restaurants nationwide.

The mixologists at Nobu Malibu made and sent over a tray of the winning “Mayonaka Sour” for us to taste. Served in a Marie Antoinette glass, QUI is enhanced with a little creme de casis, lemon juice, organic egg whites and a black sesame orgeat sprinkled on top. This pretty pink drink offered a pleasing flavor profile that was slightly sweet and a tad sour. It paired nicely with one of Chef Nobu’s most famous dishes – his signature black cod. He was the first Japanese chef to prepare black cod with a miso-sweetened caramelized glaze. It’s often attempted at other Japanese restaurants, but it rarely tastes as good.

The mixologists at the Malibu location made a “Taste of Jalisco” with QUI for the cocktail competition. This runner up is served on their “secret menu.” Ask for it, because it pairs nicely with platters of freshly made sushi and sashimi. It also is nice with a tender rib-eye steak topped with thin crispy onion strips, chives and heavenly truffle sauce.

Nobu restaurants are also known for their rock shrimp tempura bathed in a spicy cream sauce. The lightly battered shrimp has slightly creamy coating that offers the perfect amount of seasoning. It’s very addictive and I doubt you will be able to eat only one. The tempura shrimp is also available in a buttery lemon sauce.

Before leaving, we learned that QUI has been awarded the gold medal in the Spirits of the Americas competition, and will soon be served at all Nobu restaurants worldwide.

Take a trip to the beach and sip QUI Tequila as a new beverage option with Chef Matsuhisa Nobu’s Japanese delicacies with a Peruvian and California flair. $$$ Open Monday through Friday for lunch at noon, and 11 a.m. on weekends. Dinner service is served Sunday through Thursday until 10 p.m. On Fridays and Saturdays, dinner is served until 11 p.m. 22706 Pacific Coast Highway, Malibu; (310)317-9140.

Trio of suspects sought for burglary