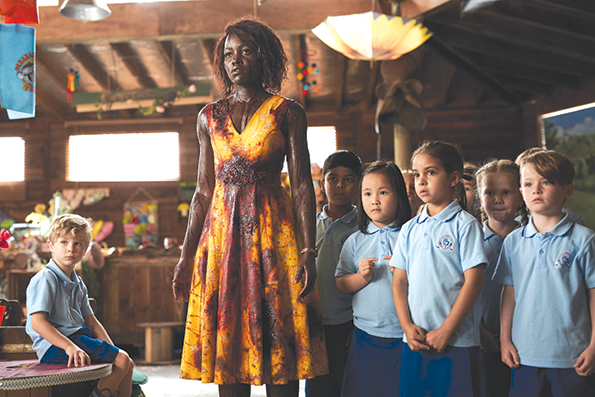 For a horror subgenre with the simplest of rules – get bit, you become the sluggish undead (running variety excluded, of course) – zombie films and TV series continue to turn out a substantial number of hits and near misses. AMC’s “The Walking Dead” might be slipping some in the ratings, but it has accumulated a massive following and garnered two spinoffs and a feast of digital content.

As for all those films since George Romero set us on this present course, we get new installments each year. And thanks to “Shaun of the Dead,” horror-comedies thrive just as well as their more gruesome and bleak siblings. But before “Zombieland: Double Tap,” a sequel 10 years in the making, premieres tonight, Hulu provided us with a palate cleanser, “Little Monsters,” a peculiar kind of zombie comedy equally as gruesome but overflowing with childlike wonder rightfully absent across the zombie-verse.

Marketed as vehicle for Lupita Nyong’o (“Black Panther,” “Us,” “12 Years a Slave”), things get off to a disappointing start. Rather than dive into the Oscar winner’s role, we meet her through the point of view of Dave (Alexander England), a caricature of man-childishness. He oozes narcissism and self-destruction, avoiding commitment, hitting the bong too much and mooching off his sister and Darth Vader-loving nephew, Felix (Diesel La Torraca). Desperate to maintain dear sis’s couch, he walks Felix to school, noticing Ms. Caroline (Nyong’o) with the power of a painfully overt male gaze.

Let’s stop to note how tired this trope is: idiot man falls for gorgeous woman. The league system of dating certainly doesn’t exist, but a kind, selfless teacher surely doesn’t belong with a selfish tool still pining over his metal band that hung up their V-shaped guitars six years ago.

Once a parent backs out of a field trip to a petting zoo, our idiot protagonist sees his window to romance Ms. Caroline, despite the many failures of every father who’s tried. Complicating this doomed strategy, a nearby military base has a zombie outbreak, one of many, apparently, since armed first responders have a clear procedure in place for such eventualities.

Now for the fun part: the rules. First, fast or slow. A soldier actually asks that, implying they’ve experienced both kids before. Second, what to call them: the infected is the term of choice (thanks “28 Days Later”). Finally, just how dumb will the human response be. Half the fun of zombie flicks revolves around how quickly humans turn on each other or make a foolish move that jeopardizes the safety of all. To help with those dramatic moments, meet beloved children’s entertainer Teddy McGiggle (Josh Gad, the voice of Olaf in “Frozen”). On camera, he charms the kiddos. Once the infected arrive, he goes full “Lord of the Flies.”

Ms. Caroline won’t have any of that. After encountering a couple undead locals, she continues to save face for the children, claiming all the weird looking folks are playing a game. She preserves their innocence. This is the weirdest homage to 1997’s holocaust film “Life is Beautiful.”

By this point, the man-child bit resolves. Dave quickly becomes more likable, especially next to Teddy, while our teacher spends substantial time repurposing a pitchfork and shovel. She doesn’t have much to do throughout “Little Monsters,” but her natural charisma and presence ascend a mostly mediocre film that fails to make an everyday Joe the real hero in what’s best described as a wish-fulfillment story created by Aussie writer-director Abe Forsythe.

As the zombie film continued to evolve over the past 50 years, it attracted some unexpected contributions. “Fido” imagines a ‘50s community in which folks keep zombies as pets (think “Lassie” meets “Dawn of the Dead”). “Warm Bodies” gave the undead an internal monologue and romantic interest. And “Little Monsters” combines the gore and language of an R-rated horror film with the innocence of a children’s adventure.

It doesn’t entirely work, taking too long to reach this genre clash, but points for effort at the very least. The main challenge is how little occurs once the zombies attack. Most of that time is spent in a one-room gift shop, which reads like a budgetary restriction. And the entire military subplot provided unnecessary exposition. At this point, zombie fans know enough to guess how it began without all the tired backstory or cutaways obliged to move the plotline forward.

Watch it for Nyong’o or to fend off complete boredom when nothing of consequence debuts at the local cineplex. Or perhaps delve into the classics or some contemporary series. Like zombies, their media is rather endless. At least “Little Monsters” adds “R-rated children’s zombie film” to a growing body of diverse titles.