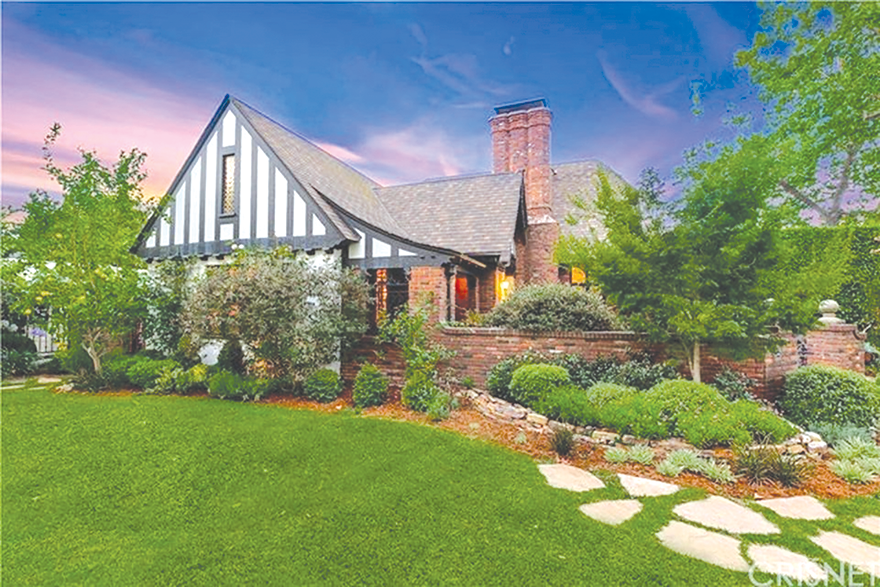 The Cole family thought the home’s new owners planned to live in the house. (photo courtesy of Zillow)

On Wednesday, Oct. 23, onlookers gathered to watch the Tudor-style house located at 361 N. Citrus Ave. take the first blows from bulldozers and a demolition crew.

Despite an effort from Los Angeles City Councilman Paul Koretz, 5th District, there was not enough time to save the house. Koretz filed a motion to consider granting the house historic-cultural monument status and stay the demolition.

The Los Angeles City Council couldn’t have considered the motion until Oct. 25, two days after the scheduled demolition.

Reuven and Shevy Gradon purchased the property from David and Cassidy Cole, who had acquired the home in 2010 and continued to update it through their tenancy, they said. The Coles placed the home on the market last summer following the birth of their twins in 2018.

In light of concern about the Gradons being developers, they were sold the property after assuring the Coles of their admiration for the home’s charm and 1920s character in a letter, punctuated with a picture of the pair and their son.

“I love acquiring buildings with character and forming the identity of the property by emphasizing that,” Reuven Gradon said in the letter. “With your home, it is already so beautifully cared for with such incredibly rich character, it gets me even more excited to call it home.” 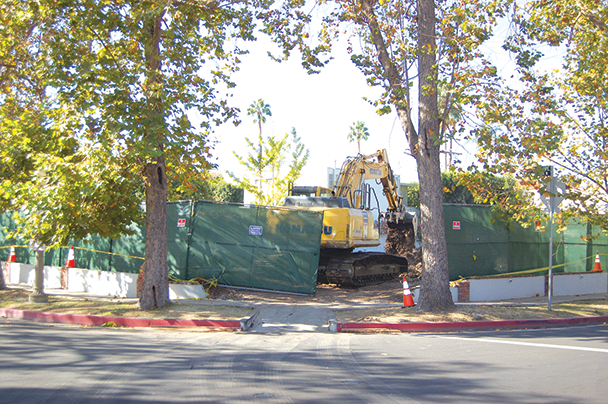 On Oct. 23, crews tore down a Tudor-style house on Citrus Avenue. (photo by Edwin Folven)

An application for a demolition permit was submitted to the city’s Department of Building and Safety by the Gradons on Sept. 18, the day Cole said they assumed ownership of the house.

On Oct. 18, before the demolition, a former neighbor sent the Coles a text with a photo of a demolition notice inside the dining room window of the house. This was the first they had learned that the Gradons were planning to demolish the home the following week.

“I do feel that he grossly misrepresented himself to us and to others,” David Cole said in an email. “I hope that he didn’t cut any corners environmentally with the demolition of a home and materials from the ‘20s, that could negatively impact the neighborhood.”

The Gradons did not respond to multiple requests for comment.

Philip Farha, chair of the Greater Wilshire Land Use Committee, expressed concern over several aspects of the demolition, including potential damage to air quality from the destruction of an older building. In regards to LADBS notifying neighbors of the demolition with signage and letters in the mail, Farha noted, “the system is arcane.”

LADBS Chief Inspector Jeff Napier said over email that the demolition was done by the book and that an inspection on Sept. 25 verified that the required signage was posted. However, the Coles and most of their neighbors did not notice any signage until the less than a week before the demolition date, according to Cole.

“The house sits (sat) prominently on a corner lot – I’m baffled how no one seems to have noticed a single demolition sign until the end of the required 30-day notice period,” Cole said.

In 2015, the Coles’ house, built in an early Jewish enclave in 1927, was analyzed by SurveyLA, an initiative of the city’s Offic of Historic Resources. The survey aimed to provide information on which structures or neighborhoods appeared eligible for landmarks or historic districts.

Their house was labeled as a contributor of historical significance in the survey. While the findings support preservation efforts and could aid residents and city in initiating the process, the survey itself did not give the home a basis for historic designation.

Farha noted that although a case that could have been made to the council, the only way the demolition could’ve been prevented would have been for the Coles to include a deed restriction in their sale of the property.

“We believed their letter. And in the house’s 92 years, no previous owner needed a clause. We all knew what a special home we had,” Cole said.

Although I doubt the Gradons will read my comment, I’ve decided to post it anyway as an immediate and effective form of anger management at their duplicitous and deliberately misleading behavior. They fraudulently expressed their excitement at being able to call their new acquisition “home,” implying an intention to tend to and care for the lovingly maintained property passed on to them. Their greed and mendacity, not to mention the curious late timing of the demolition notice, have demonstrated their lack of character, a value system that places ethics well below personal gratification, and a sheer disregard for acting in good faith and in a trustworthy manner. When/if they move into their newly gutted and reconfigured house, I dearly hope the people in the immediate vicinity deny them the courtesy one ordinarily shows to neighbors, since they deserve nothing but incivility and cold shoulders.

I have lived across the street and loved this house for 14 years. There was never a demolition notice placed in the dining room window of this house. Not for one day. We would have acted immediately to save it if there had been. We learned a few days prior to demolishing the house that that was Gradons intention. With our quick actions we were able to get Koretz to put in an emergency application for historical status of the house on the Tuesday before the Wednesday demolition. On Wednesday morning we noticed activity and began rallying around the house, by 9 am a bulldozer showed up. we stood in front of the bulldozer to prohibit it from entering the property. Workers went around us with axes and began hacking out the leaded glass windows and hand carved beams defacing the exterior- within a few minutes they had defaced the entire exterior- at that point we knew the house was destroyed and that we had lost the fight . Through lies, deception, cheating, and breaking the law Reuven and Shevy Gradon got what the wanted. We kept being told that morning by one of Gradon’s minions that they “ are going to build something much more beautiful” . This house not only represented our cities history, but provided a sense of strength, permanency, beauty, and comfort for the neighborhood. In our minds there is nothing more beautiful than that. In 15 minutes last Wednesday with an ambush of a few axes and a bulldozer that was all destroyed.

When the City Council wanted to impose an emergency moratorium on evictions last week, they were able to get that done in record-setting time. Stopping this demolition, however, clearly didn’t excite them nearly as much. I live in Carthay Circle which has been an HPOZ since 1998 and where demolitions are not allowed for any conforming home. However, our historically “protected” neighborhood, and many other HPOZs around here, are about to be trampled over by Metro’s Crenshaw Northern Rail Extension Project. So while it’s illegal for homeowners to tear down, or often even construct period-appropriate additions, the city seems to have no problem with destroying HPOZs entirely to lay their tracks and upzone giant swaths of the city. I suspect if that happens a lot more builders and developers (and homeowners) like this article’s example will ignore the demolition rules as well. If the city can ignore the laws so can others, right?

Such a shame this gorgeous home is gone! And the fact these owners lied so viciously is so morally corrupt and disturbing. This house if decided to be demolished (which it shouldn’t have been but…), should have been at least able to be taken down to restore parts of this historic piece of architecture. The leaded windows, the painted ceilings, an incredible front door, huge batchelder fire place, and all the fixtures around the house just turned to garbage and dumped into a landfill. Not very environmentally friendly or any care for these architecture pieces!! So these owners lied stating their love for historical architecture. Despicable. Can’t wait to see the tacky and cheap home they build. They seem to be rushing to get it all done to probably flip the property. I am sure building it with cheap materials and their workers seem to be messy and not professional. And all these new homes start to fall apart within a decade. So buyers beware!
And all the landscaping around the house also destroyed. What a waste of beautiful plants and trees. Now, those old sycamore tree around the house could be destroyed!! They aren’t caring for them or watering them. Just such a disappointment of human behavior and lies.

Not only am I sickened at the thought of one of my favorite houses in Los Angeles now being in rubble, my wife and I, trying to be first time home owners, are equally disturbed and angered at the thought that we could be outbid by couples like the Gradons who misrepresent their desires to protect historically significant homes. The homes we’ve bid on usually have character and charm, which means details or craftsmanship that is now nearly obsolete. So reading that the Gradons knowingly lied about their love of these details… holding out hope of reducing them to dust… only disheartens us about people’s true intentions, as well as the City of Los Angeles’ priority of protecting it’s own history.

The Gradons should be ashamed of themselves and I hope the City of Los Angeles takes action against a developer/real estate investor like Reuven Gradon for hiding the demolition process from the sellers and especially the neighborhood who will hopefully never get see Mr. Gradon’s dream house come to fruition.

They are despicable. No respect for history. They lied. I’m a Jew and am so ashamed of them. People like them give us all a bad name. Reuven Gradon Is the president of Afton properties and sounds like he’s a slum landlord from everything I’ve been reading about him. He may wear a yarmulke but he disrespects God and his religion would not approve of his lies.