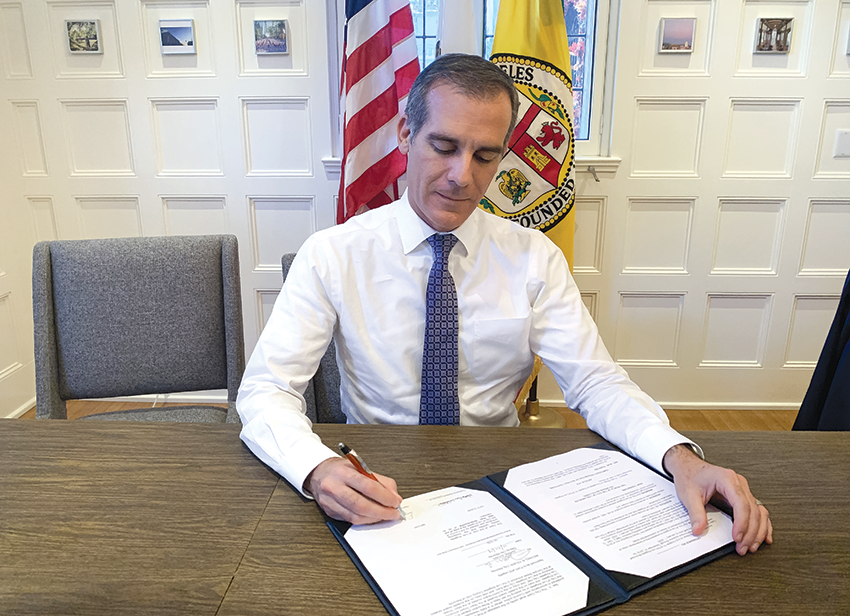 On Oct. 22, the Los Angeles City Council voted unanimously to approve an ordinance that temporarily prohibits no-fault evictions in the city.

The ordinance, which passed with a 14-0 vote, will temporarily ban evictions without a just cause in apartments built before 2005. Councilman Jose Huizar, 14th District, was absent.

Mayor Eric Garcetti signed the ordinance on Oct. 22, and it will go into effect once the ordinance is published by the city clerk, which council members and city staff said they expect to happen this week.

The ordinance, which was proposed by Councilmen Mitch O’Farrell, 13th District, and Curren Price, 9th District, will stay in effect until Dec. 31, as the state’s ban on no-fault evictions, Assembly Bill 1482, goes into effect on Jan. 1. There have been many reports of Los Angeles landlords issuing no-fault eviction notices and drastically increasing rents before the law goes into effect.

“Our city is experiencing a housing crisis, and we should be using every available tool to keep people in their homes, and runaway rents in check,” Garcetti said in a statement. “This ordinance is an important measure that will prevent evictions before the new state law takes effect, and I am proud to be able to sign it into law today.”

Several council members and public speakers, including Councilman Paul Koretz, 5th District, wanted legislation to also cover drastic rent increases, which could serve as a de facto no-fault eviction. Councilwoman Nury Martinez, 6th District, proposed a temporary ban on rent increases at the same Oct. 15 meeting in which O’Farrell and Price introduced their ordinance. Martinez said she expects her ordinance to return for council consideration later this week or early next week.

In the meantime, some council members suggested the city could use an emergency declaration to put in place price-gouging protections, which limit a price increase to 10%. While not as effective as the state’s law, which limits rent increases to 5% plus inflation or 10%, whichever is less.

“If there was an earthquake or fire, a declared emergency, that [price-gouging] law kicks in. You can’t go above 10%. This is also an emergency,” said Councilman Bob Blumenfield, 3rd District.

Chief Assistant City Attorney David Michaelson said the city attorney’s office is looking into the potential of such a rule.

In the packed City Council chambers, several public speakers – and some council members – wanted the no-fault eviction ordinance to be retroactive, potentially as far back as March, when Gov. Gavin Newsom began discussing AB 1482.

“Even one tenant for me is too much, and we should not be permitting or signaling to any landlord that they should try to exploit this circumstance,” said Councilman Gil Cedillo, 1st District.

However, if the ordinance were to be applied retroactively, defending it in court would be “tougher sledding,” Michaelson said.

The council decided to include two amendments: one that would explicitly state this new ordinance would not negatively impact rent-stabilized units, and another that allows tenants who are fighting their eviction to remain in their units while the eviction is adjudicated. It will be applicable to any tenants for whom time has not run out on their notice to vacate, Michaelson said.

Still, council members and city staff indicated that they expect to be sued over this ordinance, and the city included a “severability clause,” meaning if one portion is struck down in court, the rest of the law might remain in place.

“I don’t want to have an ordinance that’s overturned tomorrow when the first lawsuit is filed,” said Councilman Paul Krekorian, 2nd District.

However, even with that clause, Michaelson declined to promise the law’s success in court, though he did pledge that the city attorney’s office would do its best to vigorously defend the law.

In last week’s debate on the topic, council members said the issue had to be handled quickly and well. After a lengthy debate on Oct. 22, specifically with concern to how far the city could go in protecting renters who already had been served a notice to vacate, the council decided speed was the more important factor and approved the ordinance with only the amendments for rent stabilization and allowing tenants to remain during adjudication.

“Every moment that we delay, every second that we wait, someone is at risk. We are attempting to speculate what a judge will or will not do. I just think that at this moment, it is incumbent upon us to do the best that we can to help the majority of the people by moving this and moving this now,” said City Council President Herb Wesson, 10th District.

A win for Beverly Hills