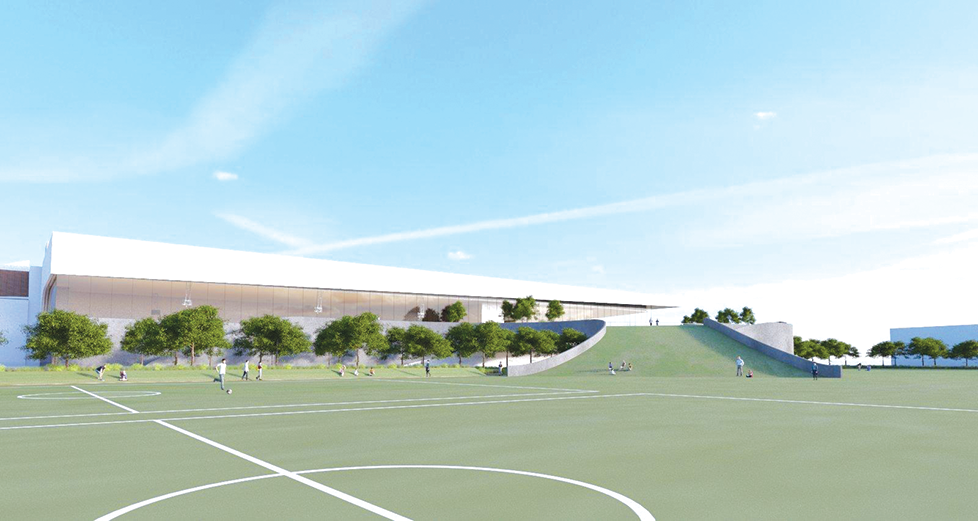 The plans for the revamped La Cienega Park include a landscaped bridge that spans La Cienega Boulevard. (rendering courtesy of the city of Beverly Hills)

On Oct. 22, the Beverly Hills City Council clarified its preferences for the La Cienega Park and Recreation Master Plan.

When looking at the project – which is expected to include, among many other features, a 72-foot-tall building with indoor and outdoor tennis courts, two pools and three basketball courts that’s connected to athletic fields by a landscaped bridge that spans La Cienega Boulevard – council members made clear they are looking for a park and recreation facility of which the city can be proud.

“There’s no doubt that the park today has passed its useful lifespan and is, on some levels, an embarrassment … This is a structure that will hopefully last us for 50 years or more,” Councilman Julian Gold said.

The current plans estimate the costs as $125.5 million for the side of the park on the west side of La Cienega Boulevard, which will host two levels of above-ground parking on which the recreation center will be built, and $34 million for the east side, which includes athletic fields and more parking located underground. Soft costs – furniture, equipment and other expenses – could add 20% more. The anticipated price tag, however, seemed not to deter most of the council members. Neither did the scale of construction, which is likely to require at least two phases.

“We are a fortunate community. We should build something we’ll be proud of,” Councilman Robert Wunderlich said.

Councilwoman Lili Bosse, however, said she’d like to know more not only about how the city will be able to afford to build the park upgrades, but how much the new multi-story facility will cost to operate. Bosse, who drilled down into many of the details of the public outreach process and the project’s specifics, encouraged city staff to keep the public involved as the plan moves forward.

“That’s what is going to be a big part of the success of what ultimately will be built there, that people feel a part of it … that’s the goal,” Bosse said.

The council members were largely on board with many of the suggestions and preliminary designs that emerged from multiple public outreach meetings, which were conducted by city staff, David Ceppos, associate director at the Sacramento State Center for Collaborative Policy, and Jim Favaro, of the Johnson Favaro architectural firm.

Mayor John Mirisch, however, wanted to see more out of the project’s design. He did not like the bridge design or its placement, preferring it to connect to a different portion of the building. He also suggested a different architect, Zoltan Pali, who designed the Wallis Annenberg Center for the Performing Arts, could design the structure.

“If we’re going to be spending this money, we should be doing something special with it and make an architectural statement. It should be, in a sense, a landmark,” Mirisch said.

With the council’s input, the project will now move into the pre-design phase, the next step of refining the conceptual plan into a concrete project.

“I always think of this process as sort of a funnel. You start with big-picture ideas and get closer and closer to what pops out at the end,” Assistant City Manager Nancy Hunt-Coffey said.