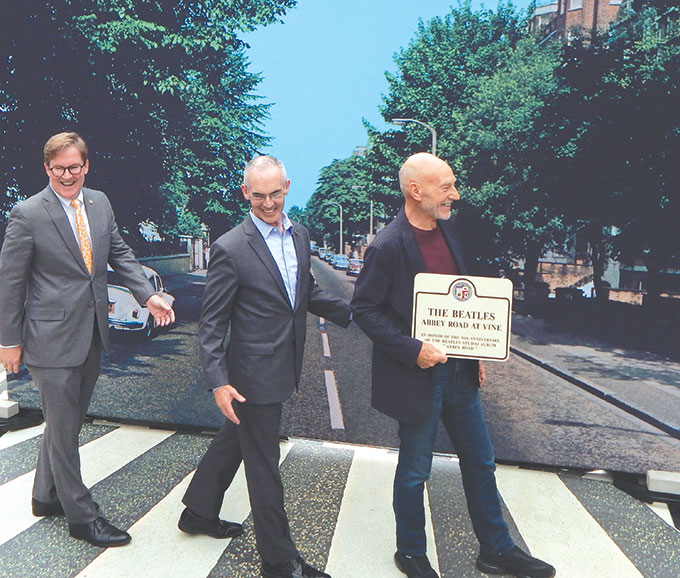 Los Angeles City Councilman Mitch O’Farrell, 13th District, said the Beatles are “really the soundtrack to my life.” The band has long been his favorite group, and he said the Beatles were instrumental in lifting him up during a depressive time in 2000.

“I was just so down in the dumps,” O’Farrell said. “I thought, ‘Just turn everything off, read a lot and listen to the Beatles.’ That’s exactly what I did for months. I have all of their CDs. I have every last one of them, and I’ve listened to them over and over.”

So on Sept. 26, O’Farrell was thrilled to help honor the 50th anniversary of the band’s “Abbey Road” album with a celebration on Vine Street near the Capitol Records Tower. Hundreds of Angelenos joined O’Farrell; Kevin James, president of the Board of Public Works Commission; and actor Patrick Stewart in recognizing the band’s impact, even five decades later.

To commemorate the occasion, a stretch of Vine Street was closed to traffic and “Abbey Road” played in front of a Beatles-decorated double-decker bus, an homage to the group’s native England. To allow the officials and attendees to take a photograph similar to the album’s iconic cover, the album’s background was reproduced on screens that temporarily stood next to a reproduced zebra crosswalk, which was marked with a permanent city sign denoting “Abbey Road at Vine.” In addition, a blue Beatles flag hung from the top of the Capitol Records Tower, and food trucks, a merchandise booth and an Amoeba Records tent helped those in attendance celebrate the Fab Four’s legacy.

James said Hollywood’s Vine Street and the Capitol Records Tower were fitting places to honor the Beatles, and he praised the group as “iconic masters of music.”

“It is incredible what the Beatles have done,” James said. “They have shaped culture. They have inspired generations. And on behalf of Los Angeles Mayor Eric Garcetti, I want to say that we are honored and thrilled that our amazing city is able to be a part of this incredible, incredible history.”

Stewart recounted his personal experience with Paul McCartney, who in 1964 dated Stewart’s costar Jane Asher, as well as the music of the Beatles as a whole.

“The importance of the Beatles’ music cannot be overstated,” Stewart said. “The Beatles’ timeless songs are cherished everywhere. They lift spirits, and they connect humanity and empathy and understanding.”

O’Farrell, who led the crowd in a sing-along of “Octopus’s Garden,” said it was “an honor” to represent the city in recognizing musicians so important to his life.

“It’s just gratifying to the soul,” O’Farrell said. “We get to share our love for them publicly, out in the open, and thank them and thank all artists for what they contribute to society.”