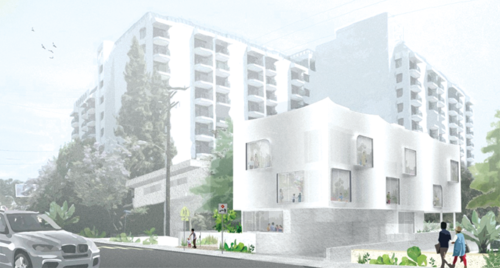 A three-story preschool planned for San Vicente Boulevard would enroll up to 72 students. (rendering courtesy of Lorcan O’Herlihy Architects)

The West Hollywood Planning Commission voted 5-2 on Sept. 5 to approve plans for a preschool that aims to open at 972 N. San Vicente Blvd., though the approval will have to be finalized in a consent calendar vote at the next commission meeting.

Though only Vice Chair Adam G. Bass and Commissioner John Altschul voted against the project, multiple commissioners raised concerns that the 8,300-square-foot, three-story preschool proposed by Nasim Pahlavan is not fully thought out and ready for construction.

The project, which plans to demolish two houses to make space for the school, which will enroll a maximum of 72 students, previously came before the commission in February. On its return, the commissioners said the project was better, though issues with transportation and the building’s one-story underground parking garage remain.

In the plans presented in February, trash receptacles in the parking garage would have forced large SUVs to impede the entrance lane as they exited the garage, slowing down traffic during peak pick-up and drop-off times. In turn, such delays could have forced cars to spend more time waiting on San Vicente Boulevard, impacting traffic.

At this month’s meeting, Pahlavan said the trash receptacles have been relocated, allowing unimpeded entrance and exit traffic inside the garage. The school’s sound walls will also be 10 feet tall instead of six, further limiting the noise impacts on the surrounding neighborhood, Pahlavan said.

Bass, who voted against the project, noted the improvements made by Pahlavan and the team.

“I look at this this is a much better project than the one that came before, and I do appreciate that. I feel like a lot of the concerns that were raised by my colleagues were addressed,” Bass said.

However, Bass said he still believes there will be increased traffic on San Vicente Boulevard because of the preschool, and he and Altschul continued to assert that the project’s potential issues had not yet been remedied, a sentiment that was echoed widely by other commissioners.

“This is a project that we can get right, and we’ve been trying to get it right, and it’s come back to us again half-baked,” Commissioner John Erickson said. “It’s not ready. [The applicants] need to talk to staff and figure out a way in which they can do it.”

Commission Chair Rogerio Carvalheiro, however, argued that as the project progresses, solutions will be found, countering some of his fellow commissioners’ contentions that by approving this project before it had been perfected, other projects might request approval without solving their own problems.

“All the projects that we see at Planning Commission are not fully baked. They’re always at different levels of development, so I don’t think we’re setting a bad precedent by allowing this project to move through with the comments and concerns that we have,” Carvalheiro said.

As conditions of the commission’s approval, the school will conduct three-, six- and 12-month traffic studies, and the ventilation in the parking garage will be studied at the request of Erickson, who is asthmatic. The other commissioners said such a study is not necessary, but Pahlavan agreed to it in order to quell concerns.

Though the seven public speakers and one comment card were divided on the project’s potential impact and fit in the neighborhood, everyone agreed more schools are something West Hollywood needs.

“I do believe that we need as many preschools as we could get into West Hollywood,” Commissioner Sue Buckner said.

Even those who raised doubts seemed open to changing their minds as the project moves forward.

“I do want a school. We all want schools. I think the building is lovely. I think you’ve done a lot of great things. I’m just not there just right yet,” Commissioner Lynn Hoopingarner said.