‘We’re more resilient than ever before’ 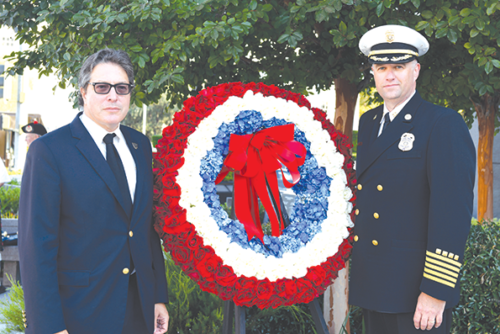 On Sept. 11, Beverly Hills held a remembrance ceremony to ensure the thousands of people hurt and killed on that day almost two decades ago are never forgotten.

In front of the city’s 9/11 Memorial Garden, which contains a piece of the World Trade Center and pays homage to the site of the attacks in New York City, Pennsylvania and Washington, D.C., local officials and first responders paid their respects to those lost 18 years ago.

Mayor John Mirisch, Beverly Hills Fire Chief Greg Barton and Beverly Hills Police Chief Sandra Spagnoli led a crowd of dozens of first responders and hundreds of community members – including Vice Mayor Lester Friedman, Councilman Julian Gold and Councilwoman Lili Bosse – in a solemn reflection on the Sept. 11, 2001, attacks and the impact they had on the nation.

“We will never forget the brave men and women running into burning buildings to save innocent [people, and] let us not forget the families who continue to sacrifice day after day,” Barton said.

The solemn ceremony included several musical performances. Fire Engineer Chad Beery sang “You Raise Me Up” and “America the Beautiful,” bagpipers played “Amazing Grace” and a pair of buglers played “Echo Taps” from opposite sides of the closed Rexford Drive. An honor guard of Beverly Hills police officers and firefighters took down the flag from the memorial and presented it to former Mayor Les Bronte, and a patriotic wreath was ceremoniously placed at the memorial.

However, the speeches took center stage, with Barton and Spagnoli discussing the impact of the attacks on first responders in particular. Spagnoli, who said she visited New York City and the site of the attacks earlier this year, said the stories of those lost, the survivors and those who helped are still emotionally gripping 18 years after the tragedy.

“I cannot help but feel a sense of anger, but also a sense of strength … The biggest change is we’re stronger and we’re more resilient than ever before,” she said.

As the Sept. 11 attacks demonstrated, work as a first responder can be dangerous, yet in Beverly Hills, first responders will be on scene within three minutes to help, Spagnoli said. Citizens should do their part to keep the community safe, she added.

“Remain strong and vigilant, and stay prepared,” Spagnoli said. “The city of Beverly Hills depends on it.”