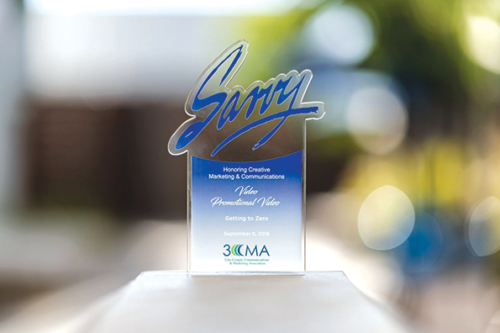 West Hollywood was honored for its outreach and communications in Denver on Sept. 5. (photo by Jon Viscott/courtesy of the city of West Hollywood)

On Sept. 5, the city of West Hollywood was honored with four awards recognizing excellence in communications by the City-County Communications and Marketing Association.

The awards were presented at 3CMA’s Savvy Awards, which was held in conjunction with 3CMA’s 31st annual conference in Denver, and recognize the communications and outreach efforts of local governments throughout the United States.

“The city of West Hollywood raises our creativity to new levels to effectively communicate our messages to a variety of audiences across multiple platforms,” West Hollywood Mayor John D’Amico said. “I’m thrilled to see that 3CMA has, with these four awards, embraced the culture and diversity of our community as we tell the stories of our city.”

3CMA conferred its digital interactive Savvy Award for Overall Website to the City of West Hollywood for weho.org, the city’s official website. In 2017, the city embarked on a year-long process of redesigning its website. Every facet of the design was meant to meet the needs of its audience while projecting the heart and soul of the city. In presenting the award, one of the judges noted, “The city of WeHo continues to show other cities how it’s done! This is one of the best websites I have seen in a long time.”

The city of West Hollywood was also awarded two 3CMA Award of Excellence honors. The first recognition was for the promotional video “I Sing the Body West Hollywood,” which was created by former West Hollywood Poet Laureate Kim Dower in homage to Walt Whitman’s “I Sing the Body Electric.” The judges called it an “innovative piece with unique storytelling and beautiful graphics. Great job on combining lyrics and animations … the video not only tells the story but makes you feel as if you know the city, even if you have never been there.”

The second Award of Excellence recognized the city’s video public service announcement, “Recreational Reefer Madness.” West Hollywood has been at the forefront of the national discussion about decriminalizing the use of cannabis, and the PSA addressed issues of where and how to buy and use cannabis in the city, as well as misunderstandings regarding public consumption and of state laws regarding driving under the influence.