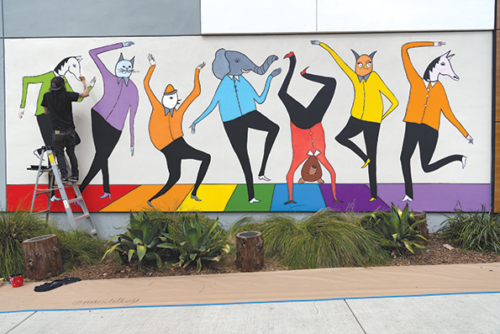 Bringing edgy, experimental and new art ideas to a city of limited size is a hard but doable task, something that West Hollywood’s Art on the Outside program has accomplished countless times over the last 17 years.

The program installs temporary rotating pieces of art, such as sculptures, murals and videos, throughout the area each year with the goal of getting people to notice the art.

“My favorite projects that have been exhibited through the Art of the Outside program transform ordinary city spaces, get people to pay attention and talk about the art work and shift the community’s perception of a space ­– even if only for a brief moment,” said Rebecca Ehemann, the program’s public art coordinator. “When artists ask me about the program, I always tell them that the city is our canvas and to dream big. It’s often the wackiest ideas that are the best fit for us.”

The artwork is on display between six months to three years, depending on the materials, location and the cost of the artwork. At the end of its lifespan, the art is returned to the artist.

The program began in 2002 and initially featured three exhibits a year. In the last four years, the program has jumped to between nine and 12 exhibits annually after Ehemann was hired.

“It has kind of ramped up exponentially since they were able to secure my position full-time,” Ehemann said.

The program has received recognition of its world-class artists, including from Americans for the Arts, an arts organization in Washington, D.C.

“They acknowledge the best public artworks from across the country each year, and I think that we have acquired five or six of those acknowledgements for some of the projects that we have done through this program,” Ehemann said.

The program’s yearly budget of $105,000 comes from an urban art ordinance that is administered through the Urban Art Program, which is West Hollywood’s permanent public art program. Developers seeking to build in West Hollywood can either pursue an onsite art project, valued at 1% of the project value, or pay an in-lieu fee of the same amount. The in-lieu fees go into an art fund, which is the sole source of funding for the Art on the Outside program.

Getting artwork into the program is no easy feat. First, the artist has to complete an application, which can be submitted at any time. Then the Art on the Outside subcommittee, which is a component of the Arts and Cultural Affairs Commission, reviews the applications twice a year.

“We have a very rigorous review and evaluation process for all exhibits proposed to the city. Things that take precedent and are primary considerations would be location, availability of space, budget, artist qualifications and experience,” Ehemann said.

One of the many artists hired by the program is Los Angeles-native Mike Stilkey, who works on murals, installations and canvas. Stilkey, 43, recently spent three days painting a mural on the outside of West Hollywood City Hall, 8300 Santa Monica Blvd., after being selected from a muralist roster associated with the Art on the Outside program.

“I seek to create thought provoking art that challenges assumptions in a humorous or whimsical way,” Stilkey said. “When I read more about the intent and vision of Art on the Outside, it sounded like a perfect fit for what I create and an opportunity to provide broad public access to community-inspired art.”

The 10-by-25 foot mural, titled “You’re All Welcome Here,” depicts several animals dancing on a rainbow crosswalk. Much of Stilkey’s work involves anthropomorphism.

“My desire for the mural was to make it fun, celebratory and positive. The animal characters bring that element and represent the vibrance and diversity of the city,” Stilkey said. “I feel strongly that animals and humans have more in common than humans are willing to admit, and I think it provides a lens into the commonalities among us as humans, too.”

Even with its bright celebratory feel, Stilkey imagines a deeper meaning for viewers.

“West Hollywood is known for providing a community with unwavering progressive values and for always staying true to these, and I wanted to honor this in the mural,” Stilkey said. “The title of the mural . . . is a reflection of those. It’s important to lift these up as we navigate our current national climate of intolerance and fear. This is a visual representation that can serve as a reminder to remain hopeful and positive in the face of this.”

Fast times at the Petersen