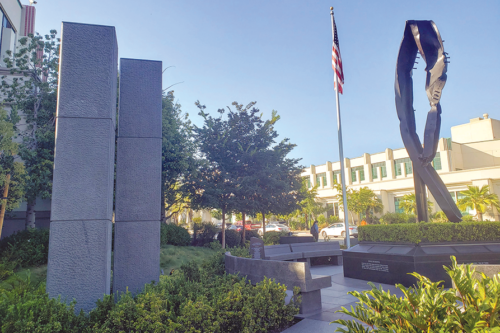 The 9/11 Memorial Garden in Beverly Hills contains a beam from the World Trade Center and a piece of the plane that hit the Pentagon. (photo by Cameron Kiszla)

Though New York City, Washington, D.C. and Shanksville, Pennsylvania, are on the other side of the country, the impacts of what happened were felt in California, too, and Beverly Hills makes it a point to never forget.

In 2011, on the 10th anniversary of the Sept. 11 attacks, the city unveiled its 9/11 Memorial Garden in front of the Beverly Hills Fire Department Headquarters at 445 N. Rexford Drive. The memorial contains a 30-foot beam from the World Trade Center and a pair of statues that resemble the Twin Towers. The beam rests atop a five-sided base to recognize the attack on the Pentagon, and a grassy area represents the field where United Airlines Flight 93 crashed.

Deputy Fire Chief Joseph Matsch said sometimes, people mistake the twisted beam and statues as just other pieces of outdoor artwork in Beverly Hills, but those who pay closer attention will find a special site that includes a piece of American Airlines Flight 77, the plane that hit the Pentagon, and its captain’s insignia wings, as well as copies of important documents like the Constitution, Gettysburg Address and Declaration of Independence.

“I think it’s the most beautiful memorial this side of New York,” Matsch said.

Each year, the city also holds a pair of public remembrances to honor first responders and the approximately 3,000 people who died, thousands more who were injured and hundreds of millions who were shaken by the attacks.

“Since that tragic day, Beverly Hills has honored the fallen each year with special ceremonies including moving tributes from our residents and first responders,” Mayor John Mirisch said. “We hope the community will join us once again as we pledge to never forget.”

The first ceremony is smaller, and preparations begin before sunrise at approximately 6 a.m. when BHFD personnel begin getting their equipment ready and raise an American flag on a ladder truck, Matsch said.

At approximately 6:40 a.m., all uniformed fire and police personnel in Beverly Hills, and any other departments who wish to participate, will assemble at the memorial so they can mark the occasion in real time.

At 6:57 a.m., the moment the first tower of the World Trade Center fell, the police officers and firefighters will stand at attention for a ceremonial bell-ringing to honor those lost in the line of duty and a moment of silence.

At 5:30 p.m., the larger – and longer, at approximately half an hour in length – event will begin. Public officials, including Mirisch, BHFD Chief Greg Barton and Beverly Hills Police Chief Sandra Spagnoli, will address those in attendance, and a collaborative BHPD and BHFD honor guard will present the colors. The uniformed officers will present the flag flown at the memorial that day to someone who’s made a positive impact on the community, though Matsch said the identity of the recipient will remain a secret until the ceremony.

“This year, it’s somebody who’s been very involved since the very beginning in supporting the fire department, just a top-notch person,” Matsch said.

Music will also play an important role, as Engineer Chad Beery will perform patriotic songs, bagpipe players will accompany the honor guard and Kirschner Creative Artists will provide trumpeters to commemorate the occasion as well. Matsch said the music is the most touching part of a ceremony that’s already emotionally moving.

“When they’re doing the [trumpets] and they’re doing ‘Taps,’ the echo version of it … it sends chills through me every time I hear that,” Matsch said. “You can’t help but be brought to tears when you hear those [trumpets] playing.”