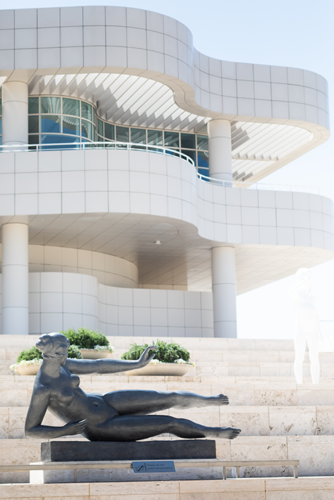 Just off the 405 on a green hilltop in the Santa Monica Mountains is the Getty Center, one of the most iconic and visited sites in Los Angeles. Home to the J. Paul Getty Museum, the stately Getty Center, with its lush gardens, stunning views and modern campus, is resplendent in Italian travertine stone. A cable-pulled hovertrain whisks visitors up the hill from street-level parking to the central campus where the museum is located. From prime vantage points at the Getty, visitors bask in spectacular views of the surrounding mountains, Pacific Ocean and the Los Angeles skyline. The setting is idyllic to appreciate the impressive art and exhibitions at the museum, including notable European paintings, sculptures, drawings and photographs.

The Getty Museum is actually housed on two campuses, which combined receive almost 2 million visitors per year. One museum – the Getty Center – features Western art from the Middle Ages to the present, while the other location exhibits Ancient Greek and Roman art at the scenic Getty Villa in Malibu. While the Getty Center now is the most well-known of the two, the Getty Villa, modeled after the Italian Villa dei Papiri, first opened in 1974, exhibiting Getty’s personal collection. After Getty’s death in 1976, $660 million of his estate was transferred to the museum, which – backed by endowment of the J. Paul Getty Trust – has become one of the monetarily wealthiest museums in the world. Getty’s collection outgrew the Malibu site, and museum personnel looked for a more accessible location to house the rest of the artworks, finally deciding on the present site of the Getty Center in the Sepulveda Pass.

The $1.3 billion Getty Center opened to the public on Dec. 16, 1997, after more than a decade of construction. The museum features modern buildings and numerous fountains, as well as a sprawling vibrant Central Garden designed by artist Robert Irwin. Fusing the beauty of nature, naturally-lit spaces and modern design, the Getty brilliantly showcases the artwork. In fall 2019 and spring 2020, the Getty Center will have exciting exhibitions on view that are sure to delight.

From Oct. 8 to Jan. 12, the Getty will present a special exhibition featuring works by French modernist painter Édouard Manet. The exhibition, “Manet and Modern Beauty,” is the first to explore the last years of the artist’s life and career. The works convey Manet’s growing fascination with nature, Parisian social life and the beautiful, modern women who embodied it, according to Emily Beeny, co-curator of “Manet and Modern Beauty.”

The Getty Museum’s temporary exhibitions are inspired by its permanent collection, often showcasing themes within the collection or branching off as launching points for loaned shows. The idea for the upcoming Manet exhibition originated from the museum’s acquisition of the artist’s portrait of Parisian actress Jeanne Demarsy as the embodiment of spring.

“That acquisition was the impetus for us looking closer at Manet’s last years and gave rise to the exhibition we are presenting this fall,” said John A. Giurini, assistant director for Public Affairs at the J. Paul Getty Museum. The exhibit will feature numerous pastels and watercolors – elegant portraits, decadent still lifes and colorful café scenes – from the final years of Manet’s life. This exhibit is unique in that it focuses on the interesting transformation of the artist’s style in his later years. 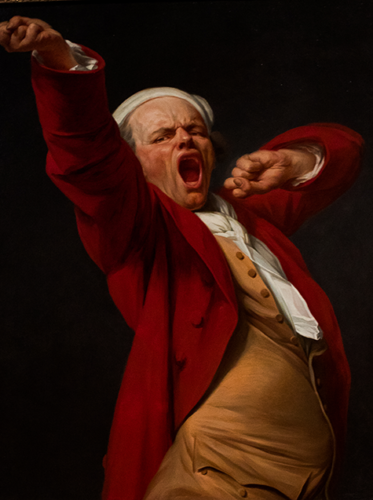 “Manet is usually remembered as the father of Impressionism – the father of modern art, really. When we hear his name, we usually think of scandalous paintings (the ‘Luncheon on the Grass,’ the ‘Olympia’ and so on) that rocked the French art world in the 1860s, but this show joins Manet at a later moment when he’s painting different kinds of pictures: portraits of fashionable young women, bouquets of flowers, lively cafés and garden scenes,” Beeny said.

“Above all, we see a new interest in capturing fleeting pleasures on the wing, making permanent the impermanent,” Beeny added. “Fashions obviously change, youthful beauty fades, flowers wilt and, in this sense, the late production – all those pretty girls and flowers, all those watercolors brushed into the margins of his letters, all those bright, little paintings – are also about impermanence.”

Beeny said Manet’s increasing attention to femininity and contemporary fashion is clear in paintings like “Boating” and “Autumn (Mery Laurent).” 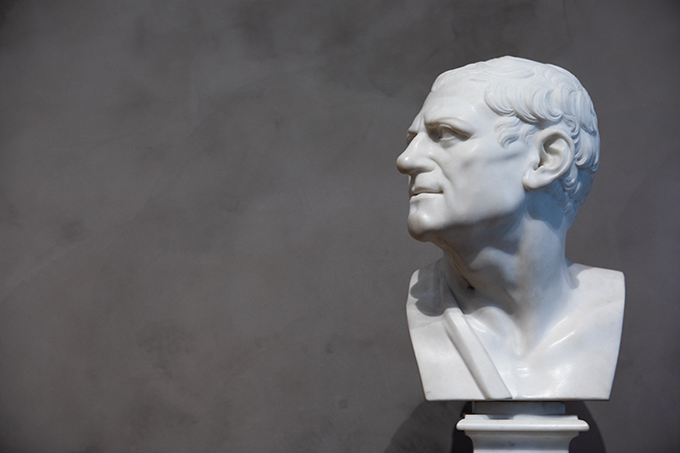 From Feb. 25 to June 7, the Getty will exhibit a major collection of Michelangelo’s drawings, many of which have never been shown before outside of Europe. The exhibit, called “Michelangelo: Mind of the Master,” features rare drawings on loan from the Teylers Museum in the Netherlands.

“This exhibition features over two dozen of Michelangelo’s rare original sketches, including designs for the Sistine Ceiling and Saint Peter’s Basilica, Rome,” said Julian Brooks, co-curator of “Michelangelo: Mind of the Master.” The centerpiece of the exhibition will be a group of drawings that used to form part of the illustrious art collection of Queen Christina of Sweden, who died in 1689.

Michelangelo burned many of his drawings – which he used as designs for his world-famous paintings, sculptures and architectural works – making what remains all the more valuable. The drawings have never been shown together as a group on the West Coast and will be presented alongside related works.

“I can’t wait to see these drawings exhibited together here in L.A. and witness first-hand how Michelangelo worked,” Brooks said.

These rare drawings provide a window into how one of history’s most talented and accomplished artists worked and planned his craft, according to Brooks.

The Getty’s permanent collection is, of course, always worth visiting as well. Some of the most well-known works include Van Gogh’s “Irises,” Turner’s “Rome,” early works by Rembrandt and a collection of paintings by Rubens, Monet and Degas. The permanent collection spans many mediums, also featuring notable sculptures, photographs, decorative arts and manuscripts.

Giurini said that the Getty hopes visitors will come away with a new understanding and greater appreciation of the role art plays in storytelling, inspiring them to tell stories of their own. As one of L.A.’s most important cultural hubs, the Getty seeks to build community and keep the appreciation of art alive for all generations.

Step into a world of color