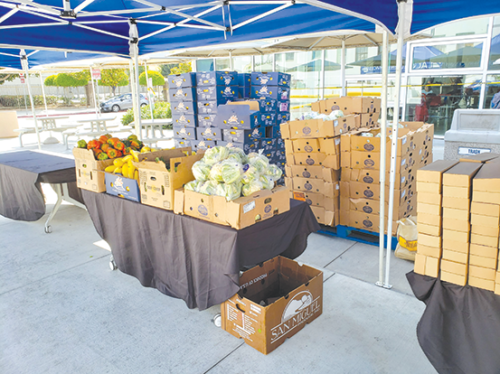 At a pop-up food pantry at Los Angeles City College on Sept. 5, students could get snacks and produce. (photo by Cameron Kiszla)

In the view of U.S. Rep. Adam Schiff (D-Burbank), community colleges play an integral role in American society, serving as some of “the most powerful engines for social and economic mobility.”

“At community colleges all around the nation, students of all backgrounds – particularly many low-income, underserved students, but also many middle-income families – are able to enjoy the benefits of a quality higher education at an affordable cost, opening up the door to their future,” Schiff said.

But at a roundtable discussion at Los Angeles City College on Sept. 5, Schiff pointed out that community college students can face bigger challenges than just tests and essays.

Schiff – who taught political science as an adjunct professor at Glendale Community College in addition to his political career – and students and administrators from LACC, GCC, Pasadena City College and the Los Angeles Community College District pointed out that community colleges are also home to many students who lack necessities like food and shelter.

According to the California Community Colleges #RealCollege Survey, 52% of the state’s community college students last year said they had worried that their food would run out before they could afford to buy more. In addition, 49% said they couldn’t afford to eat balanced meals, and 19% reported that they had at least temporarily experienced homelessness.

LACCD schools are already working to combat hunger with programs on their campuses such as pop-up food pantries and alert systems for when food is left after an on-campus event. Students who spoke at the roundtable event said such programs work.

Cherry Morse, an LACC student and single mother of four, said hunger – for both students and their family members – can make academic success even more difficult. Morse said she utilizes the LACC food pantry called Food for Thought, and it’s made a positive impact on her and her children.

“At the end of the month, I ran out of money for food, and I can’t focus when I’m hungry and when my kids are hungry,” she said. “The Food for Thought program really helped me. The resources have helped me stabilize my family in meeting their basic needs.”

The students in attendance also said food struggles can be compounded by high rents and homelessness, and vice versa. For instance, Morse said she lived in a van for 30 days. Other students said sometimes, they must choose between paying for housing and purchasing necessities like food, medicine, or school supplies for themselves or their children.

“If you have to pay all this money in rent, what does that leave for food?” LACC student Erika Summers-Degan said.

Schiff said he planned to use the roundtable discussion as part of his testimony on behalf of his bill, the Food for Thought Act, which aims to give grants to community colleges for free meals for food-insecure students.

The administrators said the nature of education is changing, and Schiff’s bill and the LACCD programs are part of the progress.

“Just as we now have these beautiful facilities for our students, our whole mission to look at the whole student is really changing, and we need to continue to educate people in that area,” said Ann Ransford, a GCC trustee.

The administrators pointed to their schools’ nonprofit foundations, which can accept donations from food banks that otherwise couldn’t go to community colleges, as necessary to the effort to end student hunger. They suggested that Schiff could incorporate the nonprofits into his bill as auxiliaries in his quest to end food insecurity on campus.

LACCD Chancellor Francisco Rodriguez said progress is being made, and though the fight is an uphill battle, feeding students and their families is a good cause.

“Ultimately, this requires leadership, the will, the stamina of Congress members [and] of trustees, [as well as] the support of CEOs [and] the support of staff to empower [and] enable [students] and eradicate this issue, which is one of the biggest problems. No student, no person should go hungry in the country that is the most affluent in the world,” Rodriguez said.