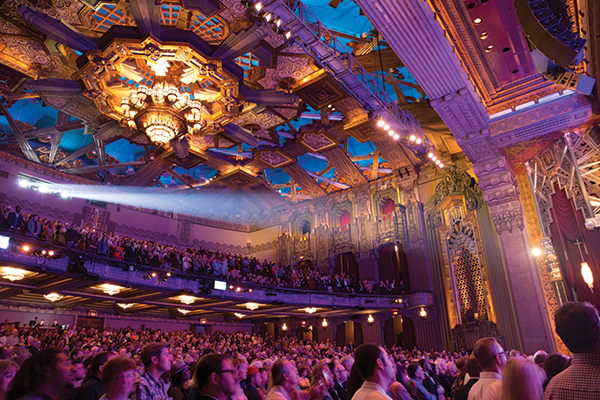 Theater-goers come to The Pantages to see spectacular Broadway shows and to bask in the grandeur of the theater itself. (photo courtesy of the Pantages Theatre)

Few Los Angeles buildings are more iconic than the Hollywood Pantages Theatre, which has been delighting L.A. theater-goers and visitors since 1930. Located at the bustling intersection of Hollywood and Vine, the Art Deco theater is at the top of L.A.’s live theater scene. People come to The Pantages not only to be wowed by incredible musical performances but also to bask in the grandeur of the theater itself. The interior is stunning with majestic chandeliers, red-velvet carpeted staircases and a lavish auditorium ceiling studded with gold and bronze starbursts backlit by royal blue.

Although The Pantages started as a movie theater, stage productions have been its hallmark since 1977 with long-running musicals like “Wicked” and “The Lion King” dominating box-office sales and selling out the 2,700-seat theater. The highest-grossing weeks in L.A.’s theater history have all been from Broadway shows presented at The Pantages, a venue which consistently brings high-quality productions to a city dominated by the film and television industries. Highlights for the 2019-20 “Broadway in Hollywood” season include hits like “Hamilton,” “Frozen,” “Blue Man Group,” “Anastasia,” “Jesus Christ Superstar” and “Summer: The Donna Summer Musical.” Season packages are available and include access to live performances at the Dolby Theatre, which has partnered with The Pantages to bring Broadway shows to Hollywood. 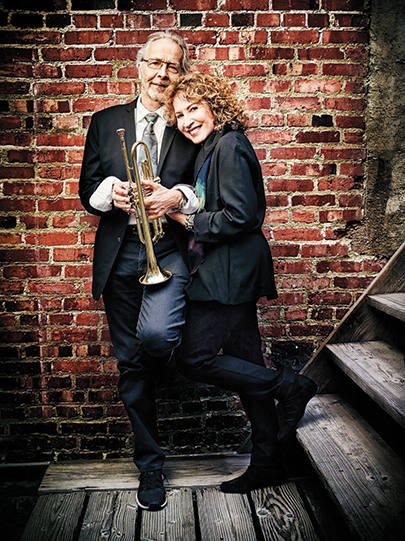 Herb Alpert and his wife, Lani Hall perform at The Wallis on Sept. 21. (photo courtesy of The Wallis)

Since opening its doors in October 2013, The Wallis Annenberg Center for the Performing Arts has become a cultural and artistic hub in Beverly Hills. While glitzy shops and restaurants often take the neighborhood spotlight in Beverly Hills, The Wallis commands attention with its sleek, modern exterior and its impressive calendar of live shows. Fusing the city’s history with its future, the 70,000-square- foot venue showcases the restored, original 1933 Beverly Hills Post Office as its lobby and houses the state-of-the-art 500-seat Bram Goldsmith Theater.

The Wallis has produced over 150 world-class theater, dance, opera and classical music shows, and its audience continues to grow. Programming for the 2019-20 season, which begins Sept.17, marks the fourth year of shows under CEO Rachel Fine and Artistic Director Paul Crewes. Highlights of the season include the U.S. premiere of the hit London musical “Romantics Anonymous” in March. Concerts include Herb Alpert and his wife, Lani Hall, on Sept. 21, Art Garfunkel on Jan. 12 and the Emerson String Quartet on May 8. The Wallis also will feature a new play celebrating the life of Nina Simone in December, and “BODYTRAFFIC,” a dance show spotlighting the Los Angeles-based dance company, in September.

“Beverly Hills has long been known as a city of celebrity and luxury, but its robust history in the arts and entertainment is considerable as well. That there’s now a major cultural and multifaceted performing arts center here, worthy of its reputation as the soul of Beverly Hills, makes perfect sense,” Fine said.

With its eclectic calendar of diverse theater, dance and music shows, The Wallis has truly become the cultural center of Beverly Hills.

In a city where the weather is too perfect not to spend time outdoors, the Greek Theatre provides an ideal venue for enjoying live shows al fresco. Located in Vermont Canyon in scenic Griffith Park, the Greek Theatre has been holding live performances since 1931. The 5,900-seat theater was styled to look like a Greek temple after the wishes of wealthy industrialist Griffith J. Griffith, who donated 3,000 acres of land to the city of Los Angeles to create Griffith Park. The Greek Theatre was rarely used during its first decades and even served as a barracks during World War II. Today, it is one of the most popular and iconic concert venues in Los Angeles, offering a regular rotation of contemporary and classical productions from world-class artists and performers. The theater’s facade, renovated in 2006 in honor of the venue’s 75th anniversary and again in 2015, is beautifully offset by the canyon hills, which provide superior acoustics for concerts and performances. Unlike the Hollywood Bowl, outside food is not allowed into the Greek, but the venue offers a wide range of food and beverage options, and meals can be reserved ahead of time. Show offerings are diverse, including performances from indie musicians, country rock stars, comedians and DJs. Highlights for the upcoming months include concerts by Hozier, Bastille, Luke Combs and the Revivalists. If you’re looking for a night of great music under the stars, grab a blanket, bring a friend and make your way to the Greek.

Nestled in the rugged mountains of the Cahuenga Pass is a magical theater reminiscent of a castle in the woods. This hidden gem is the Ford Amphitheatre, one of the oldest operating performing arts venues in Los Angeles. The amphitheater was built in 1920 for “The Pilgrimage Play,” though the theater’s original wooden structure was destroyed in a 1929 brush fire. The present theater, built in 1931 on the original site, was styled out of poured concrete to resemble the ancient gates of the Old City in Jerusalem. The Ford Theatres underwent a two-year, $72 million renovation project completed in 2017, in which the stage was reconstructed, the hillside behind the venue was stabilized and new lighting and sound systems were installed. Other infrastructure improvements included a new dining terrace and lower level concession area.

The 1,200-seat outdoor theater, now owned by the county of Los Angeles, presents an eclectic roster of performances in music, theater, dance and film. The Ford is also known for hosting family events and community gatherings.

Upcoming events for the fall and winter seasons include a performance of “La Espina” by renowned flamenco dancer Olga Pericet, a concert by Grammy-nominated pop and rhythm and blues group, We Are King, and Game Theory, a night of symphonic and electronic game music. Mexican-American singer/songwriter Lila Downs will be closing the Ford Theatres’ 2019 season on October 19-20 with ticketed evening concerts following a free, two-day Dia de los Muertos community celebration festival.

As one of L.A.’s most historic movie theaters, the Egyptian Theatre has been a prime destination for moviegoers since it hosted the first-ever Hollywood movie premiere for “Robin Hood” in 1922. Situated on Hollywood Boulevard, the grand movie palace was built by showman Sid Grauman and real estate developer Charles Toberman, who later went on to build the iconic Chinese Theatre and El Capitan Theater nearby. The Egyptian Theatre is unmistakable with its sturdy colonnade and fanciful Egyptian mural art, a design which appealed to the 1920s fascination with exotic themes. Since 1998, the Egyptian has been owned and operated by the American Cinematheque, which also operates the vintage Aero Theatre in Santa Monica. The Cinematheque raised funds to execute a $12.8 million renovation, which added a second screening theater and restored the exterior to its original 1922 appearance.

Today, the theater screens indie, foreign and classic movies and hosts film premieres, as well as director panels. Netflix is currently in the process of acquiring the 616-seat theater to hold events and promote its films, such as Alfonso Cuarón’s “Roma,” which was screened in 70 mm at the Egyptian earlier this year as part of the Golden Globe Foreign Language Nominees Series. This unique and delightful annual series presents foreign-language Golden Globe-nominated films and features free panel discussions with the films’ talented directors. There has been some resistance to Netflix’s acquisition of the historic theater from locals who seek to preserve Hollywood’s history and culture. While Netflix has not been vocal about its plans for the theater, the hope is that it will keep screening great cinema for decades to come. 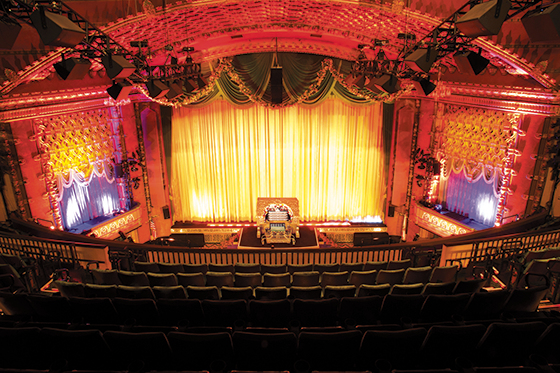 As one of Charles Toberman and Sid Grauman’s three themed movie palaces, the El Capitan stands out for its grand, cast-concrete exterior and luxurious East Indian-inspired interior. Today, the theater is owned by Walt Disney Studios and is used to host most Disney film premieres, serving as an exclusive first-run theater for the studios since 1991.  Sitting under the theater’s stunning gold-vaulted ceiling, spectators are often treated to a live concert on El Capitan’s impressive “Mighty Wurlitzer” organ, as well as a curtain light show, making the movie-going experience truly special. Declared a historic-cultural monument by the city of Los Angeles, the El Capitan has been restored to showcase its original lavish architecture while being upgraded with state-of-the-art screening and audio technology. Known as “Hollywood’s First Home of Spoken Drama,” the El Capitan presented live theater until 1941, when faltering business led owners to convert it from a playhouse into a movie theater. Orson Welles rented the El Capitan for the premiere of his controversial, now legendary film, “Citizen Kane,” after being rejected by multiple theater owners unwilling to risk screening it. In 1989, Disney and Pacific Theatres launched a two-year restoration with the aim of recreating the theater’s original 1926 appearance.

Today, the theater presents new and classic Disney films in which children and adults alike are sure to delight. Upcoming shows include screenings of Disney classics such as “The Nightmare Before Christmas,” “Hocus Pocus” and Disney and Pixar’s “Coco.”  For $12, the theater also offers a 45-minute behind-the-scenes guided tour, which includes entry into backstage areas such as the Sherman Brothers’ Star Dressing Room and a photo opportunity with the historic “Mighty Wurlitzer” organ, which has over 2,500 pipes. With its stunning architecture, old Hollywood charm and impressive screening quality, the El Capitan is a must-visit for those looking to enjoy a unique film experience in the cradle of the movie industry. 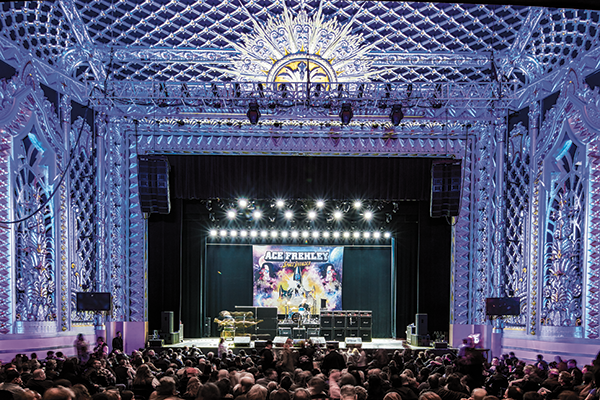 Since its opening as the Fox Wilshire Theatre in September 1930, the Saban Theatre has served as a cultural landmark for Beverly Hills and the wider Los Angeles community, providing a place for film, music and theater lovers to come together. Located at the corner of Wilshire and Hamilton Drive, the historic Art Deco building is impossible to miss and gained a spot on the National Register of Historic Places in 2012. A long-time Beverly Hills resident, architect S. Charles Lee, designed the Saban as a theater for major film screenings, even including a stage for live, pre-show acts. Over the past 90 years, the 2,000-seat theater has hosted numerous film premieres, concerts, plays, musicals and touring Broadway shows. The original interior remains almost entirely intact with ample orchestra and balcony seating and an intricate silver and gold proscenium. The lobby, too, remains true to the original, despite multiple renovations, with a Corinthian-columned, two-story rotunda and stunning Art Deco chandelier. The Saban offers an eclectic mix of live musical acts, ranging from hip-hop to rock to jazz and rap. Upcoming shows include a Buddy Holly & Roy Orbison Hologram Show on Sept. 27, a concert by Pat Benatar and Neil Giraldo on Oct. 10 and “A Night with Janis Joplin,” a musical about the legendary rock and roll singer, on Oct.18.