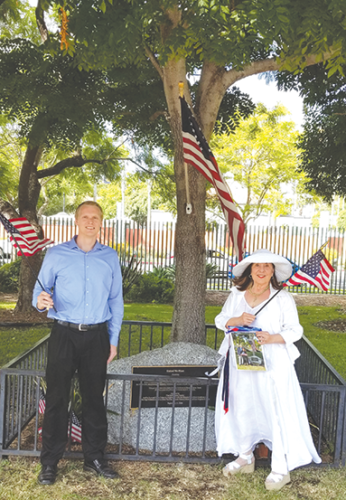 First-In Fire Foundation President Lyn MacEwen Cohen was joined by Jared Pursell, also from the foundation, at a ceremony honoring the victims of the Sept. 11, 2001, terrorist attacks. (photo by Steven Rosenthal)

Members of the Miracle Mile Civic Coalition and First-In Fire Foundation recently visited a memorial in Hancock Park on the grounds of the La Brea Tar Pits and Museum in honor of victims of the Sept. 11, 2001, terrorist attacks. The coalition helped create the memorial with a plaque honoring Charles “Chic” Burlingame, the pilot of American Airlines Flight 77, which crashed into the Pentagon after it was rerouted by terrorists. The pilot was the brother of the late Brad Burlingame, who served as president and CEO of Visit West Hollywood and on the boards of the West Hollywood Chamber of Commerce, West Hollywood Design District BID and the Sunset Strip Business Association. The Miracle Mile Civic Coalition is also part of the “United We Plant” program, in which more than 200 trees have been planted in the Miracle Mile honoring victims of the Sept. 11 attacks. The program was made possible by the Los Angeles Beautification Team, led by Sharyn Romano.