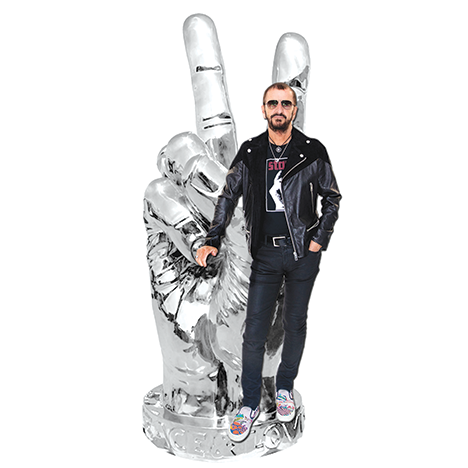 Ringo Starr’s “Peace and Love” statue will be on display in Beverly Gardens Park. (photo courtesy of the city of Beverly Hills)

The sculpture “Peace and Love” by Ringo Starr has found a permanent home in Beverly Gardens Park.

The Beverly Hills City Council agreed to put the stainless steel statue at the southwest corner of the section of the park between Beverly and Canon drives during its Sept. 10 study session.

The Arts and Culture Commission, Recreation and Parks and Cultural Heritage Commission met on Aug. 22 and decided to place the sculpture in Beverly Gardens Park.

Hedging will be installed behind the sculpture to obscure its view from the back. Starr wants to prevent the statue from being used in an insulting manner. In the U.K., the backwards peace sign is considered an obscene gesture.

“I think this will allow for appropriate interaction with the community,” Councilman Robert Wunderlich said.

“This turned into one of those Shakespeare ‘All’s Well That Ends Well’ situations,” Mayor John Mirisch said.

Set sail for the Rosewood Miramar