‘Ready or Not’ smartly mixes horror and dark comedy 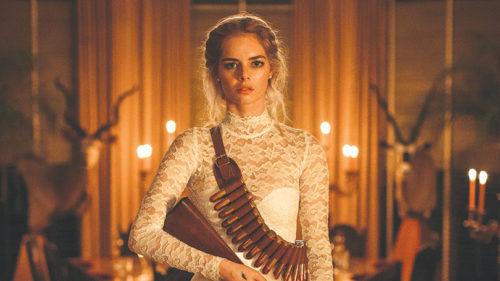 Samara Weaving stars as Grace in “Ready or Not,” a dark comedy about a family with a homicidal tradition. (photo courtesy of Fox Searchlight)

Horror remains the unsung hero of cinema, a covert golden goose dropping eggs all over the place. And it does so with the help of rather simple film titles: “The Cabin in the Woods,” “You’re Next,” “Ready or Not.” That last one certainly asks the question just how crazy the in-laws really are – murderously so here – but a deeper message about corruption festers below the slashing, screaming and occasional body bursts.

Masquerading as a slasher film, a dark comedy emerges by degrees. The premise: every time someone new enters the fold, the Le Domas family holds a special game night. Sometimes it’s checkers. Less frequent, the “Ready or Not” card appears, and a violent game of hide-and-seek follows. Why does this tradition continue? That’s half the fun, but it doesn’t channel the likes of “The Purge,” where rich people kill for the thrill.

The latest fatal round of games immediately follows the nuptials of favorite son Alex (Mark O’Brien) and new bride Grace (Samara Weaving), an orphan in search of a welcoming family. She knows nothing, while new hubby has long tried to forget the last time he witnessed these events as a child.

But rules are rules, and for the pair to marry, Alex has to come home (again, the why of it all is amazing). He probably should’ve been a bit more honest with his spouse, but love makes you do strange things, like hope she never has to uncover the truth. You know, all the stuff that helps build a strong foundation for any relationship that lasts.

Little does the Le Domas family know that Grace is a final girl, not the classic victim of horror but a new more aggressive kind. Her screams are not the result of excessive hysteria or irrational retreats down the wrong hallway. They’re the product of anguish, eventually delivered to add an air of visceral thrills. Hardly a blank slate or the usual prudish damsel, Grace dominates, with some snarky dialogue and a charming performance, thanks to Weaving, who previously fine-tuned her horror chops in Netflix’s “The Babysitter,” “Mayhem” and the Starz series “Ash vs. Evil Dead.”

As a dark comedy, of course hilarious moments occur between the scares. These rich snobs, especially Emilie (Melanie Scrofano, Star of Syfy’s cult series “Wynonna Earp”) – perpetually high and accidentally killing everyone but Grace – don’t know how to handle weaponry or the emotional toll of it all. Except for Aunt Helene (Nicky Guadagni); she cray.

One of the most telling sequels involves a debate about how closely the family should adhere to tradition. Must they use 19th century weaponry? Can they find her with surveillance cameras? It’s all laughably played out like modern people unsure how to continue a tradition or religious rite. And since they’re all so self-involved, they can’t look past their own discomfort, especially when the house staff are accidentally killed. 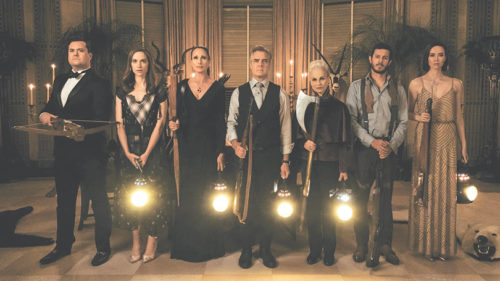 The Le Domas family prepares for a deadly game of hide-and-seek in “Ready or Not.” (photo courtesy of Fox Searchlight)

With characters like matriarch Becky (Andie MacDowell), who married into this mess, the film explores the distinction between victimhood and complicity. Becky and others who feel bad might object to what must be done, in theory, but that’s little comfort to the victims. Like guilt that momentarily washes over privileged folks who witness wrongdoing from a distance, what does it matter? Inaction still permits the crime. At least Charity (Elyse Levesque) – wife of ill-favored son Daniel (Adam Brody) – overtly supports what transpires, believing it will help her maintain a lavish life.

This all adds up to some choice words about the notion of family, namely how sentimentality permits folks to justify heinous acts in service of protecting their own. What will we do to protect those closest to us? Or more to the point, how will we lie to ourselves and screw over others? The former could be noble, but the latter highlights how the family unit can mutate into something vile when conscience is ignored in service of material gain that hurts others.

“Ready or Not” is a breakout horror hit from the unlikely director duo, Matt Bettinelli-Olpin and Tyler Gillett, whose most notable credits include a segment of anthology horror film “V/H/S” and the infuriating found-footage film “Devil’s Due.” As for writers Guy Busick and Ryan Murphy, they deserve high praise. Without them, a film this fun, refreshing and original doesn’t even get off the ground. This is a win for horror cinema and a cathartic takedown of self-serving privilege.

All aboard the fried chicken sandwich bandwagon

Atrium LA is a culinary vacation