Pushing for changes to laws and public perception 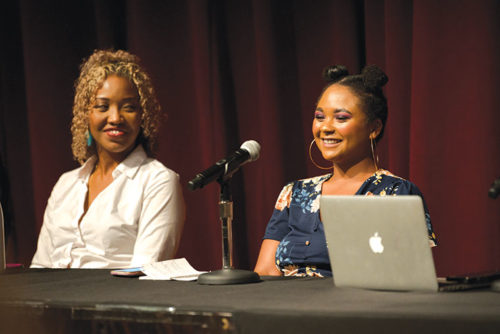 Panelists Lotus and Avery discussed the benefits and dangers of sex work at “Fighting Discrimination and Reducing Stigma: A Panel Discussion on Sex Work” in the West Hollywood City Council Chambers. (photo by John Viscott/courtesy of the city of West Hollywood)

A crowd of more than 50 people, including Mayor Pro Tempore Lindsey Horvath and City Council members John Duran, Lauren Meister and John Heilman, came to the West Hollywood City Council chambers on Aug. 29 to learn about sex work from those in the industry.

“Fighting Discrimination and Reducing Stigma: A Panel Discussion on Sex Work” was hosted by the city and Sex Workers Outreach Project Los Angeles.

Duran, who introduced the event with Meister, compared the current illegality of sex work to the laws against homosexuality and the LGBTQ community of decades past. Many of the issues West Hollywood and its residents are concerned about, such as HIV prevention, addiction and homelessness, can overlap with issues facing sex work, Duran said.

“Let’s bring some of these issues out of the shadows and into the light, where we can talk about them in an open way that only happens in the city of West Hollywood,” Duran said.

“The degree of safety and societal acceptability varies widely between [types of sex work],” Bella said. “However, like football players, coal miners and therapists, sex workers combine both physical and emotional labor to provide immediate service to the population, and they deserve equal rights and protections in these professions.”

The panelists, who answered questions from the hosts and the audience, said sex work has had positive impacts on their lives, providing an income while offering flexibility many other jobs can’t match. Panelists spoke favorably of the majority of their customers but expressed frustration with the way their lives are made more difficult by their profession. For instance, doctors can misdiagnose symptoms in sex workers by jumping to conclusions that sex work may have led to an illness, even when the work is unrelated, the panelists said. In other cases, interactions with realtors and traditional employers can be difficult because sex work often comes without pay stubs and can leave employment gaps on resumes that are hard to explain.

In particular, the panelists were highly critical of the Stop Enabling Sex Traffickers Act and Allow States and Victims to Fight Online Sex Trafficking Act, a package of bills collectively known as FOSTA-SESTA that was signed into federal law last year. The legislation allowed the government to crack down on websites like Backpage, where sex workers could advertise their services in relative safety and better screen potential clients. With FOSTA-SESTA in place, the panelists said, sex workers had to take greater risks to find work.

The dangers of the profession were another frequent topic of discussion, as stigma and the illicit nature of the job make sex workers feel uncomfortable reporting crimes. Sex workers’ reports are rarely fully investigated by police, the panelists said. Instead, the sex workers are mocked and treated “as a joke and a novelty,” Lotus said.

As an example of the issues with reporting crimes, several panelists brought up longtime West Hollywood resident Ed Buck. Two black men, Gemmel Moore and Timothy Dean, died of drug overdoses in Buck’s Laurel Avenue apartment in 2017 and January 2019, respectively, and Bella claims both men were sex workers. Panelists said it’s not uncommon for sex workers to be paid to do drugs, and panelist Andrew went so far as to call Buck a “literal serial killer.”

“I want Ed Buck in front of a jury,” Andrew said.

Both deaths were ruled accidental drug overdoses, and Buck has not been charged with a crime. Seymour Amster, Buck’s attorney, declined to comment, saying, “We’re not responding except in court.”

In a phone call after the event, Duran said the Buck case is just one example of the issues faced by sex workers. While the West Hollywood City Council can’t make decisions on criminal cases, Duran said he saw a potential for progress in other areas.

The panelists said they’d like to see the city set up an advisory board to discuss issues related to sex workers. Duran said while it may be “premature” to set up an advisory board, a task force might be a great way to push for change at the county level, where meaningful decisions related to sex work can be made in regards to decriminalization, the panelists’ ultimate goal.

“I know they want to get to decriminalization, and I think that’s a worthy goal, but it’s a multi-decade goal [that] takes years and years,” he said. “In the meantime, we can get some things done.”

For their part, the panelists said they wouldn’t stop pushing for decriminalization, and the Aug. 29 panel wouldn’t be their only event.

“This is the beginning of … many conversations with government officials to change the landscape of sex work. This is not a one-time thing,” Bella said.