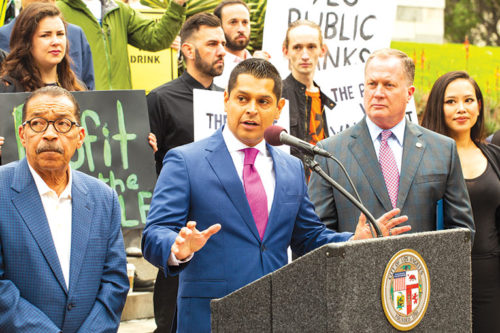 On the heels of an endorsement by U.S. Sen. and presidential candidate Bernie Sanders (D-Vermont), California’s public banking bill is headed to the Senate for its next major test. AB 857, joint-authored by Assemblyman Miguel Santiago (D-Los Angeles) and Assemblyman David Chiu (D-San Francisco), passed out of the Senate Appropriations Committee last month.

“We’re fighting for a different banking option, because California has been ground zero for Wall Street’s recklessness,” Santiago said. “AB 857 lays the groundwork for a system that supports the public good over the profits of billionaires.”

“The momentum for public banking in California is growing by the day,” Chiu said.  “The public’s money should serve a public purpose instead of lining the pockets of Wall Street investors.  This bill brings us closer to that goal.”

The nation’s largest Wall Street banks hold onto more than $700 billion in California’s state and local government dollars, according to Santiago. Under AB 857, local governments across the state could – with voter support – create their own public banks to invest those billions into their communities. These banks would not compete with existing, local institutions like credit unions and community banks.

“The committee’s vote reinforces the growing support for public banking among both elected [officials] and constituents, as Californians across the state demand a new financial model to recapture our wealth from Wall Street and reinvest profits locally,” said Trinity Tran, co-founder of the California Public Banking Alliance.

Supporters of public banks include the California Democratic Party, 17 cities and counties, 18 labor unions and many more.