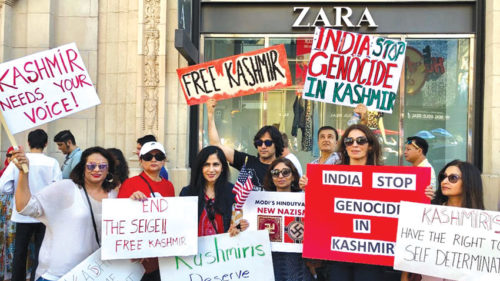 photo courtesy of the Council of Pakistan

On Aug. 31, a large rally to support Kashmir was held in the heart of Hollywood. The event on Hollywood Boulevard was co-sponsored by the Council of Pakistan, the Greater Los Angeles office of the Council on American-Islamic Relations, the Islamic Circle of North America, the Muslim American Society Public Affairs and Civil Engagement Committee, the Pakistani American Association of San Diego, and other allies and organizations.

In a statement, the Council of Pakistan praised the recent announcement by U.S. Rep. Brad Sherman (D-San Fernando Valley), chairman of the House Subcommittee on Asia, the Pacific and Nonproliferation, who said the subcommittee will hold a hearing on Kashmir.

The Council of Pakistan called the announcement “a major victory for protestors.”

“Council of Pakistan is making all members of Congress aware of human right violations taking place in Kashmir,” the group said.