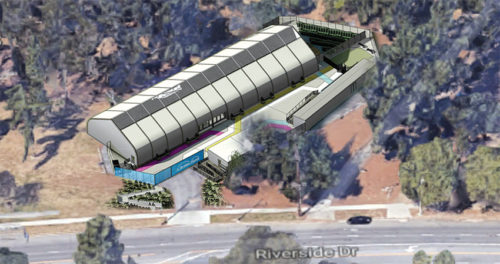 On Sept. 4, the Parks Commission gave unanimous approval to a temporary bridge housing project proposed by Los Angeles City Councilman David Ryu, 4th District, on a city-owned lot maintained by the Department of Recreation and Parks. The lot is located on 3210-3248 Riverside Drive in Los Feliz.

“In times of crisis, parks have always helped meet our highest challenges and serve our greatest needs,” Ryu said in his testimony before the commission. “Today, commissioners, I am asking you to once again help our city in its hour of need. By opening up this lot to bridge housing, we will not only meet the crisis of our time, but we will also help build community around this shared purpose of ending homelessness.”

In his remarks, Ryu cited the Rodger Young Village, an affordable housing project for military families that sprang up in Griffith Park following World War II, as an example of the role Los Angeles city parks have played in times of need.

The proposed temporary bridge housing for Riverside Drive, a part of Mayor Eric Garcetti’s “A Bridge Home” initiative, would be the fourth bridge housing project in Council District 4. It is one of five homeless housing projects currently open, under construction or under review in Council District 4. The project cleared its feasibility review earlier this year and is designed to hold 100 men and women currently experiencing homelessness. The next step is a funding motion to be introduced and considered in City Council.

Pushing for changes to laws and public perception