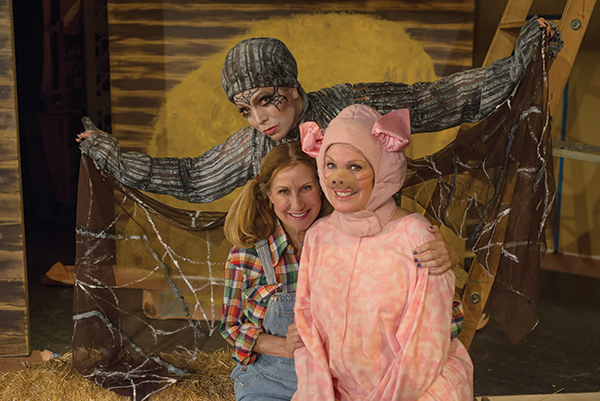 On stage, iconic characters like the Velveteen Rabbit and Peter Pan come to life, courtesy of the Theatre for Children Program by Nine O’Clock Players, a 90-year-old auxiliary of the Assistance League of Los Angeles that enthralls kids and parents alike.

Each year, the Assistance League serves approximately 22,000 children, many of whom are homeless or in foster care, by providing them with necessities like clothing, school supplies and toothbrushes and by offering services including a preschool and a college scholarship program. The Nine O’Clock Players serve “a different kind of need,” Merians added.

NOP also works to ensure as many children as possible have access to shows. It uses donations and ticket sales from Sunday shows, which are open to the public, to fund the weekday shows, which are attended by school groups. Students from Title 1 schools in the Los Angeles Unified School District receive free tickets and transportation from NOP, and for other schools, attendance is only $8 per student.

The mostly-female group also keeps costs low by paying only a handful of professionals for each show. Everyone else who’s involved is a volunteer, and many of them have been returning year after year to help out. As a result, Melanie Edward, chair of NOP, said more than 75% of the students get to see a show for free.

The students also learn lessons, as there’s a moral to each story for the children to use in their everyday lives. Past shows have covered topics like bullying and respecting others, and the upcoming show, “Jack and the Giant,” will encourage kids to be heroes and stand up for what’s right, said Julia Holland, the show’s director and producer.

The shows also have high production value. For instance, “Jack and the Giant” will feature a 10-foot puppet manned by four people, Holland said.

“It’s always exciting to do something new and creative. We have really great designers with really wonderful costumes. My job is to put the best team together as possible. That’s what I think I’ve done,” she said.

After the shows, the students get to meet with the characters in the theater’s courtyard for autographs, pictures and conversation. Holland, who is normally behind the scenes but acted on stage in a show last spring, raved about the experience.

“After the show, you get to see that look on their face. They believe the magic. You get to really see how you affected them. It’s really wonderful, and it’s also wonderful to get feedback,” she said.

Edward said the feedback makes all the hard work worth it.

“We know we’re making a difference with these underserved children in Los Angeles. Therefore, that is rewarding to us. We get back as much as we give,” she said. For information, visit nineoclockplayers.com.