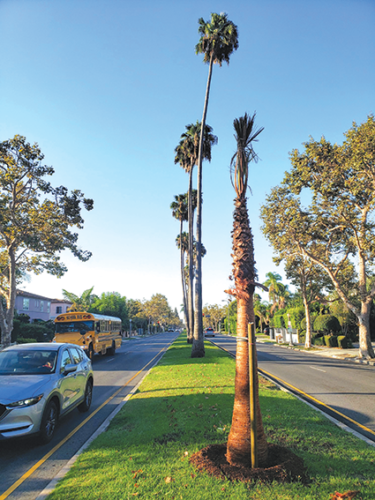 Last month, over a dozen new Washingtonia palm trees were planted in the Highland Avenue median in Hancock Park.

The trees, which were paid for by the Hancock Park Homeowners Association, were placed in areas where trees were missing, the association said.

Hancock Park arborist Sabine Hoppner’s crew, along with the Moon Valley growers, planted the new palms. The trees will be watered via watering trucks until the city is able to repair the automatic irrigation system in the median.

In a statement, the association said it has had its challenges working with the city on the median for years, but most recently, efforts to repair the irrigation have been progressing thanks to the assistance of Adel H. Hagekhalil, executive director and general manager of Streets LA, and Adeena Bleich, deputy chief of staff for Los Angeles City Councilman David Ryu, 4th District.

The association is also working with Bleich and city’s Office of Historic Resources to design historic markers to be placed in the median to designate its historic status, the association said.