Amid the ever-changing landscape of Hollywood Boulevard remains a landmark that has stayed true to its roots for a century, defying trends and delighting patrons in a nostalgic throwback to a bygone era.

Musso & Frank Grill, which turns 100 on Sept. 27, has been a home away from home for Hollywood royalty for decades, with regulars including legends such as Charlie Chaplin, John Barrymore, Marilyn Monroe, Steve McQueen, James Stewart and Elizabeth Taylor, and some of the hottest stars of today like George Clooney, Johnny Depp and Brad Pitt. Part of Musso & Frank’s success comes from remaining the same, giving customers memorable experiences they want to relive over and over again. Waiters with years of experience make everyone feel like a movie star, said Mark Echeverria, COO, CFO, proprietor and fourth-generation member of the family who owns the restaurant. 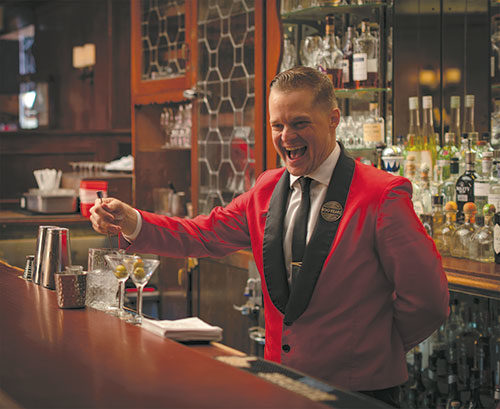 Slip into one of the restaurant’s comfortable booths or take a seat at the bar and be transported back to an earlier, simpler period in Hollywood history, he added.

The Musso & Frank Grill, founded by entrepreneur Frank Toulet and restauranteur Joseph Musso, is currently in the spotlight, as its 100th anniversary celebration runs from Sept. 23 through 27. Echeverria said the restaurant will host private parties for regulars who have been longtime patrons of the establishment during evenings that week. The Los Angeles City Council will award a proclamation to Mark and his parents, John and Cathy Echeverria; Steve and Anne Jones; and Richard and Kristen Kohlmeyer – all longtime owners of the Musso & Frank Grill – on Sept. 25 at City Hall. 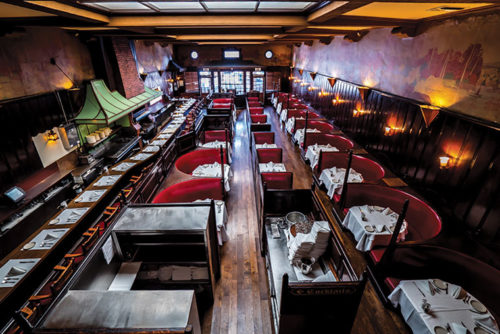 On Friday, Sept. 27, fans of the restaurant are invited to join the Hollywood Chamber of Commerce in unveiling a special honorary award of excellence, similar to a Walk of Fame star, in front of the restaurant at 6667 Hollywood Blvd. Echeverria said there will also be specials for the public to enjoy throughout the fall, with retired dishes making a comeback.

“It’s possibly the most important year this restaurant has ever had. For any business to get to be a century old is a huge milestone, and for a restaurant, it’s another level,” Echeverria said. “It is something to be extremely proud of, and we are. Here we are at 100 years old, and we are doing better than ever.”

The 100th anniversary celebration includes the Oct. 1 release of a book, “The Musso & Frank Grill,” in which author and journalist Michael Callahan chronicles the evolution of the iconic Hollywood restaurant from 1919 to the present day, with many colorful stories about how it mirrored the growth of the Hollywood entertainment industry. 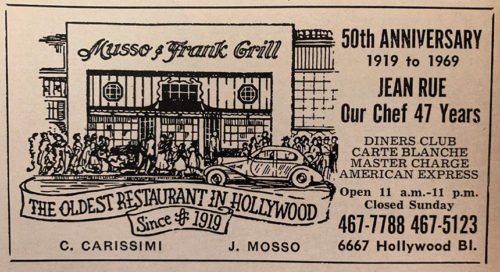 “Hollywood and Musso & Frank literally grew up together,” Echeverria said. “[The book has] a lot of photos and archival stuff nobody’s seen before. The narrative takes many elements, the servers, guests, locations … to tell the story. It’s a journey.”

Part of that journey is the delectable food patrons enjoy at Musso & Frank, including steaks, chops, lobster, shrimp and fish, Italian fare, and signature dishes such as grenadine of beef with bearnaise sauce, chicken or turkey à la king, and Welsh rarebit. The fettucine alfredo is made from a recipe from the original Alfredo’s restaurant in Italy brought to a former chef by Mary Pickford and Douglas Fairbanks.

Musso & Frank is also known for its perfect martinis, stirred not shaken. “James Bond got it wrong,” the bartenders like to say.

Echeverria added that perhaps most importantly, Musso & Frank Grill’s success can be attributed to the relationships its staff has developed with customers over the years, and an unwavering attention to detail and consistency. People who stop in for the first time often become lifelong patrons.

“What I’d like people to leave with is a feeling of warmth,” Echeverria said. “It’s the feeling people get when they dine here. I think Gore Vidal said it best, ‘Stepping into Musso & Frank is like stepping into a warm bath.’ What they truly get is comfortability, this feeling of warmth, a sense of home and a feeling they have been here their whole life. We do that through relationships. It’s that warm feeling like you are with family and friends, like you are going to be recognized when you come in.”

Echeverria also invited people to celebrate the restaurant’s 100 years by stopping in for dinner, paying tribute to its founders and former chef Jean Rue, enjoying the hospitality and reliving a memory with a Hollywood legend.

“Please raise a martini glass with us in saluting these visionaries, each of whom saw the opportunity to serve Hollywood in a way that no one else was able to, to create an establishment the city could grow up around, and to help define the ‘Hollywood’ the world knows today,” Echeverria said. “For all of us fortunate enough to be associated with Musso & Frank, 2019 isn’t solely the culmination of our first hundred years – it’s also the beginning of our second hundred years.”

Up from the ground come a bubblin’ crude