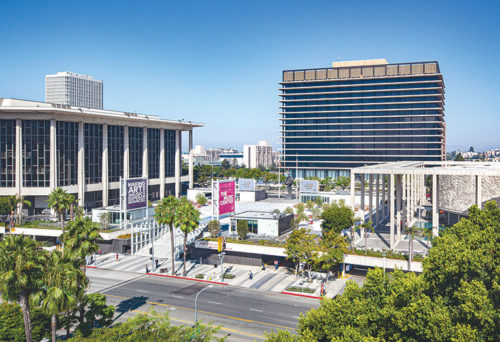 The Music Center’s new plaza is considered the county’s “Plaza for All.” (photo by Tim Street-Porter)

The Music Center recently dedicated its new plaza, an accessible outdoor urban space that has been reorganized and dubbed the “Plaza for All.”

“After nearly 20 years of imagining what the Music Center Plaza could be, our dream has finally become a reality,” Specht said. “We are so grateful and appreciative of the steadfast support and critical funding from our partners, the Los Angeles County Board of Supervisors and for the incredible generosity of our plaza donors. The plaza’s success speaks to the power of strong public-private partnership, which saw the creation of the Music Center in the mid-1960s and has now spearheaded the creation of a space, ‘The Plaza for All,’ to be a gathering place of pride for all Angelenos.”

During the opening event, more than 120 L.A.-based percussionists, representing the county’s cultural diversity, performed together to mark the official restart of the Music Center’s historic fountain. They were led by Gino Gamboa, a Music Center master teaching artist; Andrew Grueschow, from Hands On’Semble; Malik Sow, from Futa Toro West African Dance Ensemble; and Brian Yamami, from TAIKOPROJECT. The event also featured the launch of two new 12-foot-by-20-foot LED screens, which will be a platform for video art.

“The Music Center Plaza is a key component of the renovation plan for Downtown Los Angeles, securing Grand Avenue as a multicultural corridor and destination where L.A. County residents and visitors are welcome,” Solis said. “The renovation of the Music Center Plaza encourages greater access and enables everyone to more fully experience the wide breadth and diversity of the arts, culture and music of L.A. County and the First District.”

A majority of funding for the $41 million plaza capital project came from the county of Los Angeles, which contributed $30 million. The Music Center has exceeded its $11 million capital campaign goal. Lead gifts were received from Specht and board vice chairs Robert J. Abernethy and Cindy Miscikowski and the Ring-Miscikowski Foundation/The Ring Foundation. Significant support was also received from The Blue Ribbon, Terri and Jerry Kohl, Marla and Cary Lefton, Merle and Peter Mullin, Mimi Song, Marie Song, Fredric Roberts and Eva and Marc Stern. Major grants were awarded by the Ahmanson Foundation, the Ralph M. Parsons Foundation and the Rose Hills Foundation.

“More than 55 years ago, Dorothy Buffum Chandler aimed to ‘democratize’ the arts by creating a place where the public can join together as a community through mutual appreciation of arts and culture,” Moore said. “With this renovation, the Music Center Plaza is now a warm, inviting and active space where all people can play, learn, create and participate with wonder, curiosity and imagination, and most importantly, feel right at home.”