Mayor gets an Austrian honor 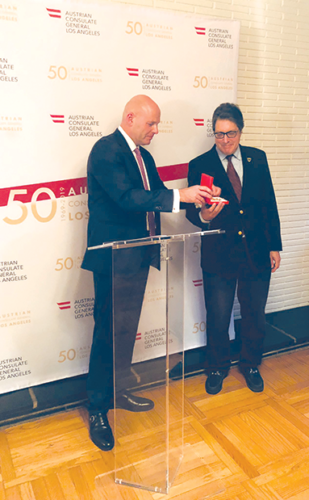 Mirisch served as director general of the Austrian subsidiary of United International Pictures in the 1990s.

“Despite the fact that I have family roots in Austria, it was somewhat unexpected for me that Austria, specifically Vienna, really felt like home for all the years I spent there. It still does, and I miss Vienna,” Mirisch said. “I’m deeply honored that Consul General Launer recognized my love for Austria and my continuing desire to promote Austrian culture and particularly to recognize the importance of Jewish history and Jewish Austrians within the country’s rich and sometimes tragic history. Receiving the Decoration of Honor in Gold for Services to the Republic of Austria is something I will always cherish; I hope it will inspire me to work towards strengthening the ties between Austria, Vienna, the U.S. and Israel, which have so much in common.”