Man sought in shooting outside subway station in Hollywood 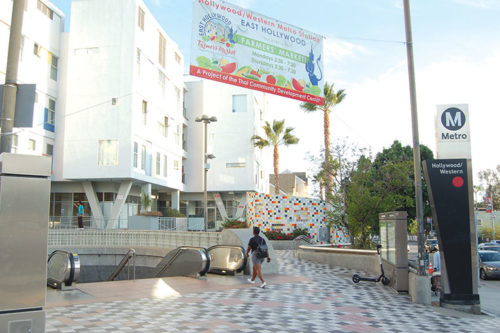 A man sustained a graze wound to his neck after being shot outside the subway station at Hollywood Boulevard and Western Avenue. Police are searching for a suspect. (photo by Edwin Folven)

Police are searching for a male suspect in his 20s who allegedly shot and injured a male victim on Aug. 28 outside the Metro Red Line subway station at Hollywood Boulevard and Western Avenue.

Officer Bill Wilson, of the LAPD’s Hollywood Division, said police received a 911 call about the shooting at approximately 9:25 p.m. Arriving officers found the victim in front of the subway station at the southeast corner of the intersection.

The victim sustained a graze wound to the neck and was treated at a hospital and released. He told police he was walking to the subway station when he encountered the suspect outside and an argument ensued. The suspect pulled out a handgun and fired once before fleeing south on Western Avenue.

Wilson said it appears from the mark on the victim’s neck made by the projectile that the suspect may have used a pellet or BB gun. No motive was provided other than the two men argued. Media reports indicated the victim was a security guard, but he was off-duty and wearing plain clothes when the shooting occurred, Wilson said. He did not know where the victim was employed.

The suspect was described a Latino, 20 to 25 years old, 5 feet 10 inches tall and 150 pounds. He was wearing a white hooded sweatshirt and white basketball shorts. He also had a black backpack.

Property owners must be part of solutions to end homelessness