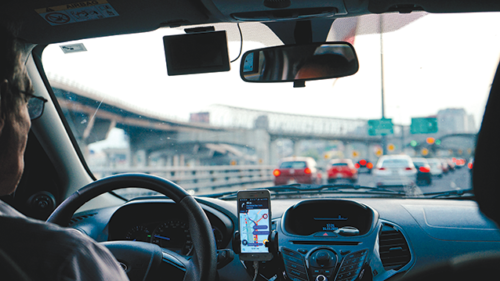 Rideshare drivers for companies like Uber and Lyft might be considered employees instead of contractors under Assembly Bill 5. (photo by Dan Gold/courtesy of Unsplash)

On Sept. 10, the Los Angeles City Council voted 13-0 to support Assembly Bill 5, which would limit the ability of companies to classify their workers as independent contractors as opposed to employees, who are afforded more protections and benefits such as sick days and minimum wage.

AB 5, authored by Assemblywoman Lorena Gonzalez (D-San Diego), was signed into law by Gov. Gavin Newsom on Sept. 18. It passed the state Senate on Sept. 10 after passing the Assembly in May.

“The hollowing out of our middle class has been 40 years in the making, and the need to create lasting economic security for our workforce demands action,” Newsom said in a statement. “Assembly Bill 5 is an important step.”

Though the bill affects multiple industries, technology companies involved in the gig economy, such as Uber, Lyft and DoorDash, have garnered the most attention. Koretz said those tech companies use a business model of “providing as little support for their employees as they can” so they don’t have to pay their workers as full employees with benefits.

“Exploiting their employees is something that has to change. I believe that the drivers are employees and they should be treated as such,” Koretz said.

“We can’t stand idly by while these big companies who are experiencing massive profits are exploiting what I feel very strongly are their employees under the guise of requiring them to file as independent contacts,” O’Farrell said. “It’s just nonsense.”

The bill – and the City Council’s resolution in support of it – did not pass without opposition. Though most public speakers in the Sept. 10 Los Angeles City Council meeting supported the resolution, a few self-identified Lyft drivers said AB 5 will mean the rideshare companies will be able to hire fewer drivers, resulting in longer waits for riders and, potentially, more drunk drivers on the road.

On the state level, the technology companies pushed back, with Uber proposing a new policy that includes higher pay and benefits for drivers. Tony West, Uber’s chief legal officer, said in a call with media members that Uber, Lyft and other technology companies have assembled $60 million to propose and enact a statewide ballot initiative in next year’s elections.

“At Uber, we embrace the challenge to improve work for drivers,” West said. “But we will continue to defend our ability to enable on-demand, independent work.”

Other industries pushed back as well, and while some were successful in earning exemptions – such as healthcare professionals, insurance and real estate agents, and commercial fishermen – others earned only a temporary reprieve. In particular, newspaper delivery drivers won’t be affected by the new labor rules until January 2021, one year after they go into effect. Newspapers across the state said the law would hit an industry that already faces its share of economic struggles.

Koretz said newspaper deliverers have been historically underpaid, and it’s “a positive step” to increase the pay for workers who may make below minimum wage.

“If it means newspapers have to cost another nickel if they’re delivered in paper form, that’s the way it goes … I’m happy to pay a few cents more to pay the person who delivers my L.A. Times and Park Labrea News and Beverly Press, to pay them decently,” Koretz said.