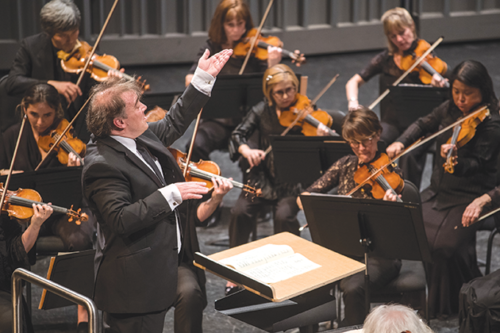 Marking a new era for the Los Angeles Chamber Orchestra and classical music in Los Angeles, Jaime Martín will make his first appearance as LACO’s music director when the 2019-20 season launches on Saturday, Sept. 28, at 8 p.m. at the Alex Theatre, and Sunday, Sept. 29, at 7 p.m. at Royce Hall.

Martín opens his inaugural season with the world premiere of “Begin,” a LACO-commission by Andrew Norman. The program also features Berlioz’ “Les nuits d’été,” one of the composer’s most popular works, featuring mezzo soprano Anne Sofie von Otter and Beethoven’s celebratory Symphony No. 7. A pre-concert conversation with Martín and 2019 Pulitzer Prize Winner Ellen Reid, who succeeds Norman this season as LACO’s creative advisor and composer-in-residence, will be held at 7 p.m. on Sept. 28, and 6 p.m. on Sept. 29. The Sept. 28 conversation will be livestreamed on LACO’s Facebook page.

“I am grateful for the six years I served as LACO’s composer in residence, and I look forward to seeing where Jaime Martin takes the orchestra going forward,” Norman said.

In celebration of Martín’s debut, LACO invites the public to a free open rehearsal of the Beethoven work, sponsored by Glendale Arts, on Sept. 28 at 10 a.m. at the Alex Theatre, followed by a welcome reception at 11 a.m. with refreshments and opportunities to learn about local arts organizations. Special guests include Brand Library & Art Center and its instrument “petting zoo,” Antaeus Theatre Company, Grand Performances, LAMusArt and more. Reservations are required; visit laco.org/meetjaime.

Martín succeeds Jeffrey Kahane, who stepped down as music director in June 2017 after a 20-year tenure. Kahane currently serves as the orchestra’s conductor laureate. Martín began conducting full time in 2013 following a prominent career performing on flute. He has since emerged as a talented technical conductor with stylistic authenticity who is known for making connections with the musicians under his direction.

‘The Game of Patience’ on display