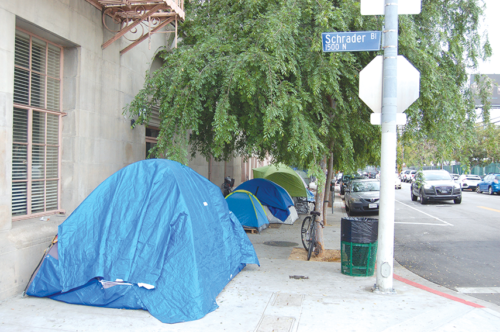 The Los Angeles City Council is considering changes to city laws pertaining to sleeping on sidewalks. (photo by Edwin Folven)

The Los Angeles City Council is considering a motion that could potentially ban homeless people from sleeping on streets and sidewalks in certain areas throughout the city.

Councilman Mitch O’Farrell, 13th District, introduced a reform to Municipal Code 41.18 during a Homelessness and Poverty Committee meeting on Aug. 21. The code banned camping in public spaces and on streets.

In April 2006, the 9th Circuit Court, in Jones vs. the City of Los Angeles, ruled that homeless individuals can’t be banned from sleeping on the street if there is nowhere for them to go.

In Martin vs. the City of Boise in September 2018, the court ruled the government can’t criminalize homeless individuals for sleeping outdoors or on public property if there is no option to sleep in a shelter or housing development. However, the court also said an ordinance prohibiting sitting, lying or sleeping outside might be constitutionally permissible.

Municipal Code 41.18, which has been a controversial part of addressing the homeless epidemic for several decades, currently states that homeless people can’t sleep within 10 feet of doorways, entrances, exits, driveways and loading docks, and that until a minimum amount of homeless housing is built, homeless individuals can sleep on the sidewalks from 9 p.m. to 6 a.m.

O’Farrell’s proposal includes a list of places where homeless individuals would be banned from sleeping, lying or sitting, including areas within 500 feet of schools, parks and daycare centers;  facilities that opened after Jan. 1, 2018, that offer housing, shelter and services to homeless individuals; bicycle paths; tunnels, bridges or pedestrian walkways designated as school routes; public areas with signs barring trespassing or closing times for safety and maintenance; and sidewalks in crowded areas near large venues such as Staples Center.

The amendment also includes a condition stating homeless individuals can’t engage in “aggressive behavior,” such as approaching, following or speaking to another person in a way that makes them fear bodily harm or damage to or loss of property, as well as being intimidated into giving money or anything of value.

The committee agreed to move the amendment before the full City Council for further discussion, though there is no date set yet.

“The reality is we have sensitive areas to consider and as city leaders, we must strike the balance between the needs of those experiencing homelessness and keeping our public spaces safe and accessible. The work will continue when these instructions go to the full City Council for discussion,” O’Farrell said.

Some councilmembers have already spoken against the motion, citing it as “cruel.”

“We need reform to 41.18, but this isn’t it,” Councilman David Ryu, 4th District, said. “After reviewing this proposal and its broader implications, I cannot in good conscience support this idea, and I doubt that it would be feasible or enforceable. We can’t patchwork enforce our way out of homelessness, and we need laws that are effective and fair. I believe limiting encampments near schools and playgrounds makes sense – but this proposal is too broad, bordering on cruel. As I have said time and time again, especially when it comes to policy as important as this, we should be including more voices and expertise into the process, not rushing it through.”

According to the “Guiding Principles and Practices for Unsheltered Homelessness” policy statement approved by LAHSA’s Board of Commissioners in February 2019, “We need to end our neighbors’ homelessness, not sweep it out of sight. Fines and citations, encampment clearings and other municipal practices and policies that disrupt and displace people create additional barriers and setbacks for people experiencing homelessness, making it more likely that people will remain homeless even longer . . . Municipal ordinances should not criminalize homelessness. Ordinances that limit necessary, life-sustaining activities such as sitting, sleeping or eating in public spaces unfairly target people living on the streets. In the absence of adequate alternative or private places to undertake those activities, people have a right to perform these activities in public.”

As usual, David Ryu has it wrong.