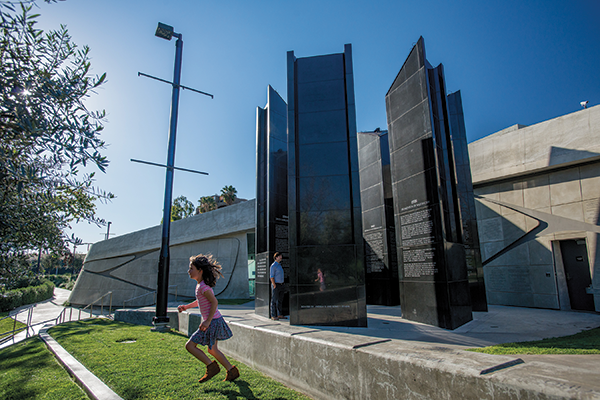 Six pillars stand as a monument to mankind at the Los Angeles Museum of the Holocaust. Etched on these monoliths, collectively called the Holocaust Monument and Martyrs Memorial, is the story of one of the darkest chapters of the 20th century.

Two decades after the end of World War II, what started as gatherings of Holocaust survivors during the early 1960s – whose families carried artifacts that survived the grasp of the Nazis and the voyage across the Atlantic Ocean – transformed into an institution dedicated to keeping their stories alive. The Los Angeles Museum of the Holocaust opened in 2010 in Pan Pacific Park.

“As Holocaust survivors become fewer and fewer, it’s more valuable than ever to hear from them directly,” said Jill Brown, communications and outreach director. “We’re fortunate to have a pretty large community of Holocaust survivors who volunteer their time to tell their stories and answer questions.”

The museum’s interior layout mirrors the chronology of Jewish life in Europe before, during and after the Holocaust. Developed by architect Hagy Belzberg, the space includes the faces of author Franz Kafka, psychoanalyst Sigmund Freud, philosopher Theodor Adorno and psychologist Victor Frankl, who are enshrined on a wall acknowledging Jewish contributions to the arts, politics, industry and science. School groups usually recognize one prominent Jewish figure – Albert Einstein – and learn about the contributions of other leaders during the period.

Visitors first see an exhibition that exemplifies what life was like for European Jews and how they were unaware of their differences with non-Jewish neighbors, Brown explained.

“It tells this story of how many German Jews were very integrated into German society and considered themselves more German than Jewish [and] were proud to have served their country in World War I,” she said. “So it was a dramatic shift from one generation to the next when they were no longer [considered] German citizens and then targeted for murder.”

As visitors move through the museum, the ceiling lowers as Adolf Hitler rises to power, when Jewish citizens lived in and were then removed from segregated ghettoes. Photographs document the human suffering caused by anti-Semitic and ideological policies and military force. Stories about deportation to the concentration camps across Europe are told under faint, artificial light. But out of the darkness, tales of survival and resistance emerge, such as the stories of Anne Frank, Oskar Schindler and the allies who saved Jewish refugees, leading to the eventual liberation of the camps. 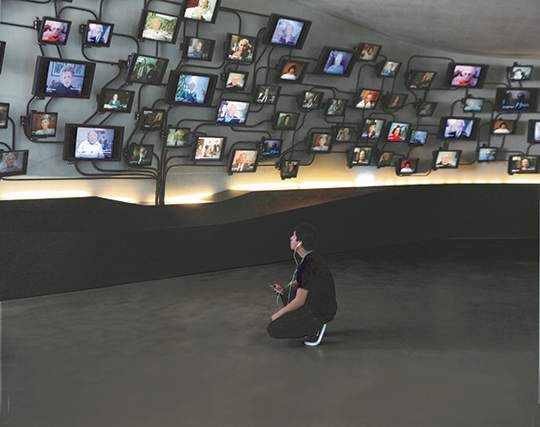 LAMOTH provides free Holocaust education to students and visitors from across Los Angeles, the United States and the world. (photo courtesy of LAMOTH)

The museum also devotes time to lesser-known stories during those fateful years. One of the museum’s special exhibits, “Venerated – Persecuted – Forgotten: Victims of Nazism,” identified by banners hanging in the U-shaped main corridor, explains the history of the German sports club FC Bayern Munich. Under Nazi control, Germany imposed rules on the club’s membership, ordering the removal of Jewish members, which the club resisted.

“Women at the Frontline of Mass Violence Worldwide” is another special exhibit, recounting the testimonies of women who have survived violence and genocide, including Roma survivors from World War II, indigenous women from Guatemala and Yazidis who survived the terror group ISIS after being targeted with violence beginning in 2014.

The museum’s other ongoing exhibition conceptualizes survivors’ accounts into prose, art and film. The art in “Messengers of Memory: Survivors Empowering Students” was created by middle- and high-school participants of the museum’s Holocaust Art and Writing contest, which is sponsored by the 1939 Society and Chapman University’s Center for Holocaust Education.

The museum’s mission is to commemorate, educate and inspire through engagements and education programs so that they can  help build a more respectful, dignified and humane world.