“To Dad with Love:  A Tribute to Buddy Ebsen” will return to Theatre West for a three-week run this month. 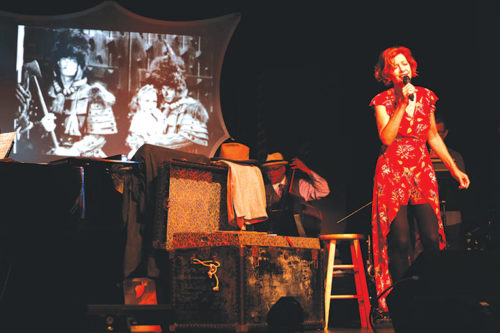 Kiki Ebsen commemorates her father, Buddy Ebsen, in the one-woman show “To Dad with Love.” (photo courtesy of Cliff Lipson)

The one-woman show, which stars singer, songwriter, actress and recording artist Kiki Ebsen and is directed by S.E. Feinberg, is a multimedia jazz/cabaret homage that Ebsen, with the help of her brother Dustin Ebsen, designed as an homage to their father.

Buddy Ebsen is best known to the American public for his iconic starring television roles as the sidekick George Russel in “Davy Crockett,” as Jed Clampett in “The Beverly Hillbillies” and for his title role in “Barnaby Jones.”

Ebsen is also remembered for film roles, including appearing as Doc Golightly in “Breakfast at Tiffany’s” and in his immortal role as the original Tin Woodman in “The Wizard of Oz.”

“From George Russel to Jed Clampett to Barnaby Jones to working with Walt Disney, I tell my dad’s story,”  Kiki Ebsen said.

Performances will run from Sept. 6-22 on Fridays and Saturdays at 8 p.m. and Sundays at 2 p.m.

General admission tickets are $25 per person, $20 for seniors and students with ID, and $15 per person for groups of 15 or more.

Join WeHo for ‘Pizza and Preparedness’