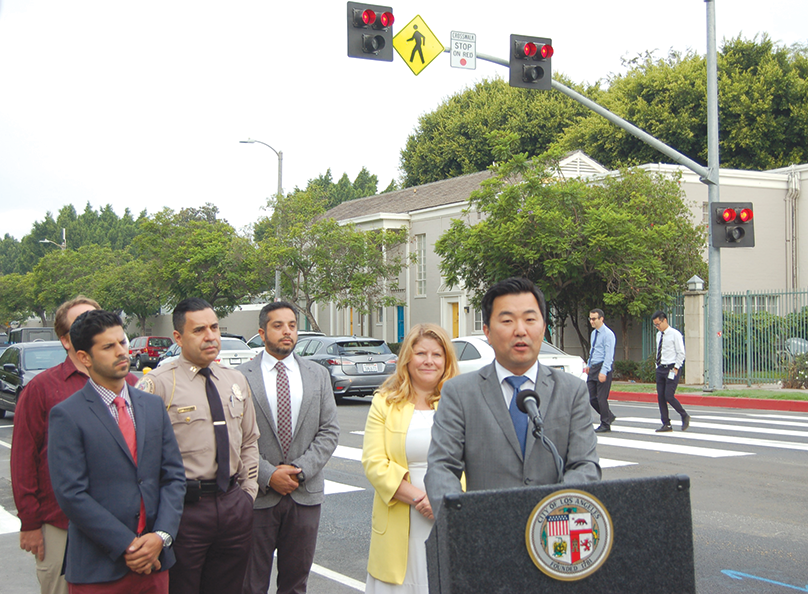 The new signal and crosswalk will make it safer to cross between Hancock Park, which surrounds the Los Angeles County Museum of Art and the La Brea Tar Pits and Museum, and a sidewalk running along the south side of Park La Brea. LADOT General Manager Seleta Reynolds said it uses the most cutting-edge signal technology to ensure safety.

Known as a high-intensity activated crosswalk beacon, or HAWK for short, the signal has multiple phases. It remains dark so motorists can pass by until a pedestrian pushes a button to activate the signal. Once that occurs, the light turns yellow and then solid red, requiring traffic to stop. After a solid red phase, the light begins flashing red and a countdown timer for pedestrians begins to show how much time is left to cross. If the pedestrian has finished crossing and the red lights are still flashing, motorists can proceed through the crosswalk.

Ryu praised the signal and crosswalk as the latest safety measure for the local area and a model for the rest of the city.

“There have been far too many accidents on this stretch of Sixth Street, which connects residential areas like Park La Brea to L.A. icons like LACMA and the La Brea Tar Pits,” Ryu said. “That is why we have been implementing many data-driven solutions that reduce the rate of accidents and save lives up and down Sixth Street. I’m thrilled to welcome this HAWK Beacon as the latest installment to make Sixth Street safe for all.”

Ryu cited two left turn lanes and seven crosswalks installed over the past three years along Sixth Street between Fairfax and La Brea avenues as additional safety improvements. He also mentioned the death of Ildiko Horvath, who was struck and killed in 2016 while crossing Sixth Street near where the new HAWK signal is located. 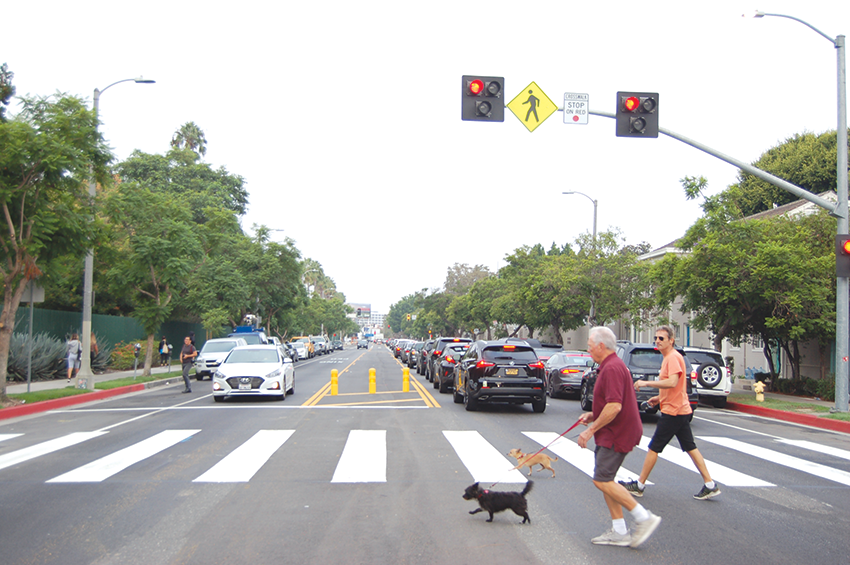 The HAWK signal uses red and yellow lights to slow car traffic for pedestrians who wish to cross. (photo by Edwin Folven)

Reynolds said HAWK signals cost between $150,000 and $200,000 depending on their configuration. Regular traffic signals cost approximately $250,000 to $350,000, she added. The HAWK signal on Sixth Street was funded by Ryu’s office and the office of Los Angeles County Supervisor Sheila Kuehl, 3rd District.

“My office was happy to support this important safety project,” Kuehl said. “I’m hopeful that pedestrians will be able to cross more safely as a result of this new signal.”

Reynolds said HAWK signals are good options for streets with long distances between regular crosswalks. It is located on an open stretch of Sixth Street between signals at Ogden Drive and Curson Avenue. Reynolds said officers will monitor the crosswalk to ensure motorist are obeying the law.

“LADOT makes our streets accessible and safe as our top priority, and we are always looking for new and innovative ways to deliver,” Reynolds added.