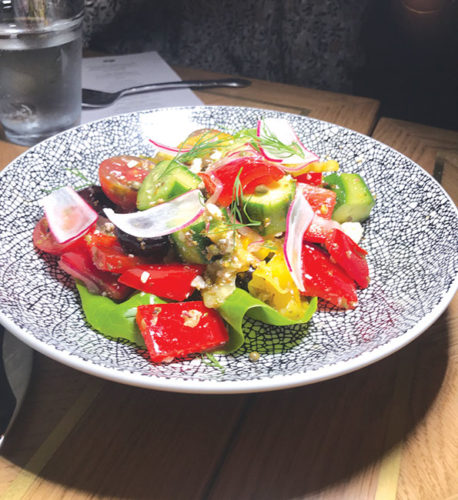 The Greek salad at CLEO is colorful and full of Mediterranean flavors. (photo by Jill Weinlein)

Chef Martin Heierling, raised in New Zealand, offers a new seafood-centric Mediterranean menu at the newly reopened CLEO in Hollywood. He works with fishmonger Patty Glennon and a variety of California family farms to present the freshest seafood and organic produce for his mezze specialties, which include a new plant-based section and raw bar.

Founder and CEO of SBE Entertainment Group  Sam Nazarian and his team performed a major redesign with Dakota Development to seat 120 guests among rich velvet and jewel-tone colors, lush tapestries and Mediterranean fixtures. Mixed metals and marble create a vibrant, sexy and glamorous space. The restaurant opened in June, and a stunning Cleopatra portrait greets guests upon arrival.

Walking into the open dining room is a display of freshly caught seafood, including red seabream, Maine lobster, red snapper, branzino and snapper on ice.

The Brussels sprouts and the spicy brik pastry cigars filled with spiced beef and labaneh feta remain on the menu. New items include a selection of shared plates, starting with house-cured olives and bowls of vegetables pickled in dill, coriander, fennel and mint, and a trio of dips delivered with house-baked Jou Jou bread. It’s similar to pita bread and easy to tear open to spread baba ganoush, hummus and labaneh dips.

CLEO’S beverage program includes hand-crafted cocktails served in whimsical glasses, including a grapefruit bubbly named “Shell-shocked” that was served in a glass shell with a glass straw. The “Puffin Stuff” was served in a tall-stemmed glass shaped like a puffer fish. CLEO also offers a highly curated wine selection.

The salt-roasted beets were a little too salty for me. It arrived with a ricotta salata, mint, dill, squeeze of lemon, crunchy pistachio and a tahini sauce. We also had a quinoa and tuna salad drizzled with a white soy and lime vinaigrette.

Heierling is very proud of his cured salmon – a trio of bite-sized natural, beet and truffle-cured slices.

A fried cauliflower from the plant-based section is enhanced with green chili, blue cheese, tahini and garlic chips. The charred asparagus was cut into bite-size pieces and dazzled with a Greek herb salsa, and the large marble potatoes were soft, creamy and sprinkled with rosemary and sea salt.

Grilled kebabs of the prime beef and a mixed grill assortment of lamb shawarma, crispy chicken and butcher’s köfte were well seasoned and tasty.

New seafood dishes include a whole branzino sprinkled with herbs. A squid ink and saffron paella is topped with fruits of the sea – clams, mussels, shrimp and chicken.

One of the most spectacular dishes was the signature Turkish Guvec. Flambéed tableside, a semi-hard cheese melts into shrimp, tomato, basil, spices, grape molasses and a squeeze of lemon. It’s served with crusty bread for dipping or spreading on top.

We finished with two wonderful desserts – an Israeli tapioca pudding with passion fruit on top and a Sorrento Meyer lemon curd and sour cream cheesecake. When it was delivered, our server poured a generous amount of limoncello on top of the cheesecake for another dramatic show at the table.