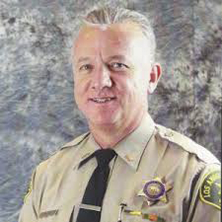 A former Los Angeles County Sheriff’s Department lieutenant who served at the West Hollywood Station pleaded no contest on Sept. 12 to tipping off a massage parlor employee about law enforcement raids in exchange for sex, the Los Angeles County District Attorney’s Office announced.

David Smith, 61, pleaded no contest to one count of obstructing and delaying law enforcement and two counts of solicitation of prostitution, which are all misdemeanors. He was immediately sentenced to 150 hours of community service, placed on summary probation for three years and ordered to stay away from massage parlors and spas.

Smith initially told investigators he would conduct lawful inspections at massage parlors in West Hollywood but admitted to having sex at two locations in 2016 and 2017. He deterred law enforcement from investigating the massage parlors, said Deputy District Attorney Rachel Greene of the Justice System Integrity Division.

Smith allegedly called an employee of Pine Therapy Massage at 8424 Santa Monica Blvd. on June 4, 2017, and told her that law enforcement operations were imminent and they should close the business for the evening. It was unclear whether Smith allegedly tipped off employees at massage parlors prior to that date.

The criminal complaint alleged that Smith was interviewed by a sheriff’s department investigator on June 5, 2017. He allegedly initially told the investigator he visited the massage parlor on Santa Monica Boulevard on June 4 to tell the owner about upcoming street closures that could affect the business and later called on June 4 to speak to the owner about a possible robbery. He later admitted to “frequently visiting” the location for “sexual purposes” and said he had advised Kim about possible law enforcement operations, according to the criminal complaint.