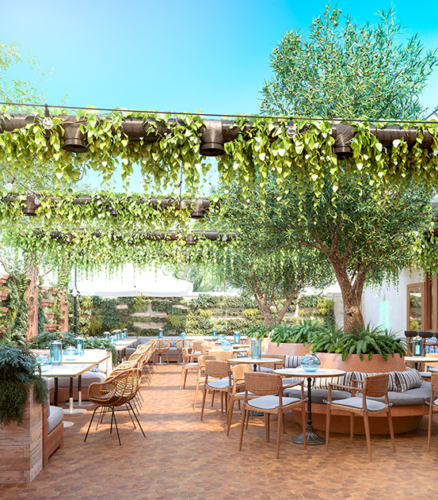 West Hollywood’s first consumption lounge will use plants and a ventilation system to contain smoke and odors. (rendering courtesy of Lowell Farms: A Cannabis Café)

The grand opening marks a milestone for the café, located at 1201 N. La Brea Ave., as the first fully legal cannabis consumption business in the country.

“We are charting new territory from literally every angle,” Lowell Café Director Kevin Brady said. “There are rules and regulations that didn’t even exist a year ago within the city of West Hollywood, so we’re very much on the forefront of something new.”

After Lowell Café and PleasureMed were selected to receive consumption lounge licenses from the West Hollywood Business License Commission, the state changed a regulation that cannabis businesses were not allowed to sell anything other than cannabis to customers, according to West Hollywood’s Community and Legislative Affairs Manager John Leonard.

“We had always envisioned all of our lounges being able to sell food and drink and looking more like restaurants and bars that have cannabis,” Leonard said.

Lowell Café worked around the regulation on food sales by creating two businesses under one name: a restaurant, which will serve food and non-alcoholic drinks, and an indoor and outdoor cannabis lounge, where customers can consume cannabis and edibles. The restaurant cannot sell tobacco products as a condition of its approval by the Business License Commission.

The final step for Lowell Café was to go before the Business License Commission. The café received approval on July 16.

“We were able to get around that and allow Lowell to open,” Leonard said. “We are certainly really excited for Lowell to be opening. They are going to be really the first cannabis restaurant or café within the country. We anticipate strong demand, and we anticipate more businesses like Lowell opening in the future in the city.” 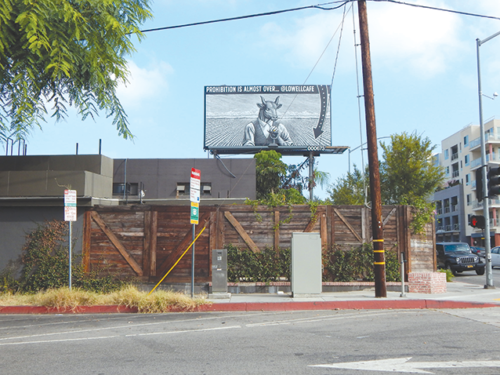 In preparation for its grand opening, the café sold out its reservations in less than one day.

“We are very excited to open as we welcome the end of the cannabis prohibition. The response from the city and upcoming guests from around the world has been incredibly supportive,” Brady said. “We realize there’s a spotlight on us, and we want to pave the way for the cannabis industry as a whole. We welcome other businesses as legalization and the normalization of cannabis use spreads.”

The two businesses will exist within the 1,600 square-foot restaurant, the 2,500 square-foot indoor cannabis lounge and the 1,800 square-foot outdoor garden where guests can consume edibles, vape and smoke cannabis.

The restaurant will feature farm-to-table, organic menu items from Chef Andrea Drummer. Though none of the food at the café is cannabis-infused, the cannabis lounge will offer small edibles that are also farm-to-table. Customers can order food from the café in the separate cannabis lounge, and the purchase will be on a separate check from the café.

“Chef Drummer has implemented her expertise to create a first-of-its-kind menu complementary to the heightened senses from cannabis,” Brady said.

Though there have been concerns about smoke coming from the cannabis lounge, Lowell Café will be using a high-end ventilation and filtration system to dissipate the smoke, Leonard said.

“Lowell Café has very specific conditions on their business license that all of the odor needs to be contained within the property. If any of the odor escapes the property, they need to remedy that,” Leonard said. “They also have a lot of vegetation that they hope will block some of the smoke and things like that as well. We have really tried to make sure that these businesses won’t be impactful to the neighborhood.”

Leonard said surrounding neighbors approved of Lowell Café because it will have three security guards onsite to make sure people don’t purchase cannabis, leave the store and consume it outside.

“West Hollywood and marijuana go back 100 years. Even before there was officially a city of West Hollywood, we know that cannabis was up on the Sunset Strip. It was spotted at speakeasies, the underground nightclubs, the mob-run underground casinos. We are finally bringing it all out into the light,” Duran said. “The cannabis consumption lounge is really consistent, I think, with our history and our culture and our values . . . West Hollywood has always been known for being a little more flamboyant, outlandish, anything goes. I hope that will always continue. That is what makes us unique in Southern California . . . I think this is one of those ‘only in West Hollywood’ stories, and I look forward to their opening.”

The Business License Commission has approved two other retail locations, and a third is awaiting approval in September, Leonard said.

Proposition 64, which legalized recreational cannabis in the state of California, was passed in 2016, and the West Hollywood City Council adopted a cannabis ordinance allowing different cannabis businesses to be licensed in the city on Nov. 20, 2017. The city underwent a merit-based selection process for the cannabis applicants, and the city received over 300 screening applications –­ 81 in the consumption lounge application category – which were scored by the city’s five-member Cannabis Application Evaluation Committee.