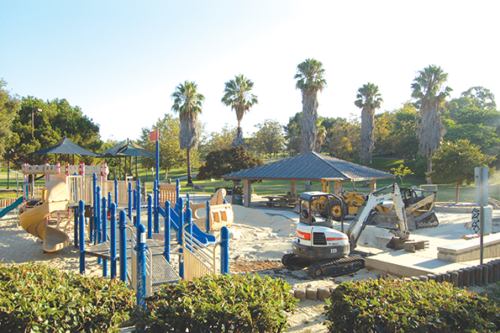 A new playground is expected to open at the end of October in the southern portion of Pan Pacific Park. (photo by Edwin Folven)

Work began this week on a new playground in Pan Pacific Park that will bring improved play structures, safer surfaces and more shade to the green space.

The playground is the latest improvement to the Fairfax District park, where a refurbished baseball diamond and new soccer field were unveiled last year. New play structures will replace existing ones at the playground adjacent to the new athletic fields. When completed at the end of October, the site will be more welcoming for children and families who come to the park for recreation, said Los Angeles City Councilman David Ryu, 4th District.

“Some of my fondest memories from childhood were made in Los Angeles city parks, and I know firsthand how important quality green space and playgrounds are to kids and families,” Ryu added. “Pan Pacific Park is the heart of Mid-City, and whether it’s new athletic fields or an upgraded playground, I want to make sure this park is the best it can be for the kids, families and individuals who rely on it.”

The equipment designed by the Indiana-based company GameTime is specifically engineered with safety in mind. Rubberized ground surfaces are made from recycled tires and other materials that allow for soft landings. The playground will be ADA-compliant with play structures that are tailored to children 2-12 years old.

“It’s much safer and heat-resistant,” said Ryu spokesman Mark Pampanin. “Right now, they are playing on sand, which gets hot.”

The play structures include new swings, slides, climbing apparatuses and more. New shade canopies will be installed over the equipment, complementing an existing shaded space with tables adjacent to the playground.

Sheila Grandahl, who visited Pan Pacific Park on Wednesday with her 3-year-old son Adam, said she is excited about the new playground.

“I think it will be great,” she added. “[Adam] likes to play on the swings, so I’m sure the new ones will be his favorite. I’m looking forward to seeing it open.”

The playground project was funded by $540,000 in Quimby fees, which are paid by developers for park improvements in lieu of land donations for parks when the city approves private projects. Pampanin added that the new playground is part of a larger effort to bring new amenities to the park and improve quality of life in the neighborhood. Other improvements in the works include improved signage at entrances at the southeast and southwest corner of the parks, more outdoor fitness equipment, better lighting and additional security features.

“There are so many families in the area,” he said. “We are excited to get this installed as soon as possible.”