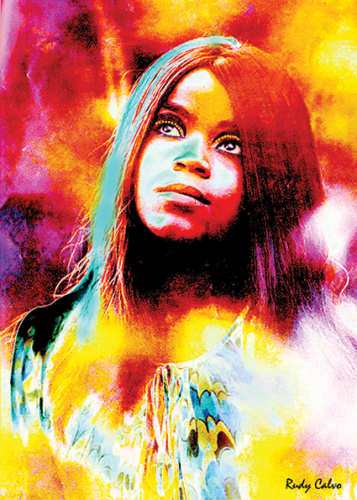 Rudy Calvo’s “Angel of the Morning” is part of an exhibit highlighting the talents of artists with Parkinson’s disease. (photo courtesy of the Parkinson’s Community Los Angeles)

Parkinson’s is a debilitating disease that causes tremors and shaking, loss of movement and cognitive impairment. Celebrities diagnosed with Parkinson’s, such as Michael J. Fox and Muhammed Ali, have generated much public attention about efforts to prevent and cure the disease.

The Fairfax District-based nonprofit Parkinson’s Community Los Angeles is taking a new step in helping people with the affliction by hosting “Living Artistically with Parkinson’s,” a fundraiser, exhibition, artist reception and silent auction on Saturday, Sept. 21, from 2 to 6 p.m. at Rebecca Molayem Gallery, 481 S. Fairfax Ave. The event demonstrates the creative talent of people with Parkinson’s and includes paintings, sculpture, mixed-media works and photography by artists living with the disease. In turn, the $45 admission cost and proceeds from a silent auction will help fund the programs at Parkinson’s Community Los Angeles.

“This is our second year of doing this event, and it has been a success,” said Judy Yaras, vice president of the Parkinson’s Community Los Angeles. “Our focus is on making life better for people living with Parkinson’s on a daily basis by providing resources, referrals and support groups. The idea is to make people feel they are not alone.”

Parkinson’s disease is a neurodegenerative, progressive disorder that affects brain function and movement. Symptoms and severity differ among individuals, but common characteristics are tremors and shaking of the hands, slow movements, limb rigidity, and gait and balance problems.

There are an estimated one million people living with Parkinson’s disease in the United States and 31,200 in Los Angeles County, according to the Parkinson’s Community Los Angeles. Approximately 2,000 Angelenos are diagnosed each year.

The Parkinson’s Community Los Angeles was formed in August 2015 in the living room of Yaras’ home in the Wilshire Vista neighborhood. Her husband, Sandy, was diagnosed with Parkinson’s 16 years ago at the age of 63, and they found there was a lack of resources in Los Angeles for people with the disease. Yaras said the Michael J. Fox Foundation is a well-known national organization focused on raising awareness and funds for research and a cure, but there was nothing in this area to help people cope with the disease. As time progressed, the Yaras family realized there was a need for a central entity that could work directly with patients and provide access to personalized help.

“It was born out of the challenges we faced,” she said. “[My husband] had to do early retirement and we needed to find out more about the disease. We got very involved in the Parkinson’s community right away. We learned there was this need. There was no one you could call if you had questions.”

Yaras said the Parkinson’s Community Los Angeles started by hosting a conference on Parkinson’s in 2016 and also formed support groups, including a group that meets on the second and fourth Tuesday of the month from 11 a.m. to 12:30 p.m. at Bethel Lutheran Church, 5750 W. Olympic Blvd., and a group for young people with the disease that meets on the last Wednesday of the month from 7:30 to 9 p.m. at the Cheviot Hills Recreation Center, 2551 Motor Ave. The organization hosts additional support groups in Culver City and Westwood.

Yaras said another key component is having a staff member to provide information about resources and programs by telephone and email. She encouraged anyone seeking information to call (310)880-3143, or email info@pcla.org. Information is also available by visiting pcla.org.

Yaras said one of the myths about Parkinson’s is the disease only affects older people. While most people develop the disease around age 60, young onset Parkinson’s disease accounts for 2% to 10% of the total number of people diagnosed each year, according to the Parkinson’s Foundation. The disease can affect people as young as 20.

The “Living Artistically with Parkinson’s” exhibit features works by artists Carol Higgins, David Solie, Marcia Brager, Rudy Calvo and many others. The event on Sept. 21 will include a buffet. Tickets are $45. People can also attend a free preview on Friday, Sept. 20, from 4 to 9 p.m. at the gallery.

“[The exhibit] is a real representation of what Parkinson’s is, because we have works by the young and old and everything in between,” Yaras added. “Many were artists before, and they had to learn to create art in another way. It’s going to be an amazing evening.”