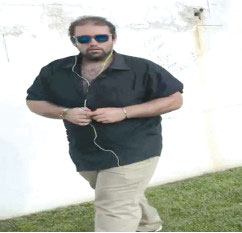 Police released a security camera photograph of the suspect who vandalized a Sikh temple shortly after the incident. (photo courtesy of the LAPD)

A 29-year-old man who was convicted of vandalizing a Sikh temple on Vermont Avenue in the Los Feliz area in 2017 was sentenced to 16 months in state prison on Sept. 16 after pleading guilty to one felony count of vandalism of religious property.

The defendant, Artyom Manukyan, scrawled graffiti on a wall at the temple near the corner of Vermont and Finley avenues on Sept. 22, 2017. The graffiti mostly included nonsensical messages, as well as the words “Nuke death … Sikhs.”

Manukyan, of Glendale, was arrested shortly after the incident. Police did not disclose how they identified Manukyan, who allegedly has prior arrests for burglary, auto theft and making criminal threats. A security camera image of the suspect was released to the media shortly after graffiti was found.

Manukyan had also been convicted previously of arson for a fire he started in Burbank. He pleaded guilty to the vandalism charge on Aug. 22 and is in custody.