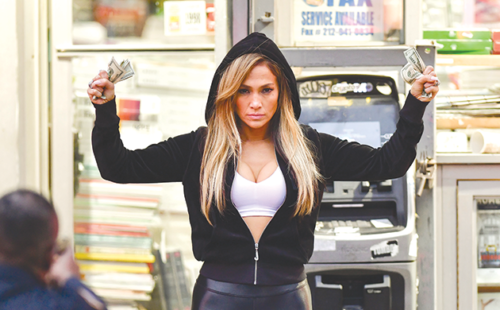 Jennifer Lopez steals the show as Ramona in “Hustlers.” (photo courtesy of STXfilms)

This ain’t no “Magic Mike” cautionary tale about the woes of stripping. It’s hardly a ringing endorsement of drugging high-paying Wall Street tools either. Instead, “Hustlers” is a fascinating commentary on fragile masculinity and the ways women make do amidst a deck stacked against them.

Socio-economic dilemmas lead to nightmarish remedies. Destiny (Constance Wu) feels that pain as a struggling exotic dancer until she meets Ramona (Jennifer Lopez), who always knows what to say and how to lure vulnerable men into that champagne room. They soon become besties cleaning house. Destiny can finally pay off her grandmother’s debts.

But Ramona fights back. With the help of old friend Mercedes (Keke Palmer) and newbie Annabelle (Lili Reinhart from “Riverdale”), they target rich dudes at bars, lure them back to the club and get them loose enough to keep charging that Visa.

Destiny enters the con just as things get a bit more shady. Getting drunk and spend-happy just takes too long. If only something could help them expedite the process. Cue roofies. They experience a few close calls, but these hustlers enjoy a good run without much resistance. Apparently alpha males would rather deal with a few thousand missing in their accounts than admit some women conned them.

Ramona has all the right answers, all the appropriate rationale. Nobody went to jail for ruining the economy, so this is revenge. And in a film produced by Will Ferrell and Adam McKay (“Anchorman,” “Vice”), “Hustlers” wonderfully complements McKay’s “The Big Short” on that 2008 disaster.

“Hustlers” clearly establishes a central problem: men suck. We see this on many occasions, from shady Wall Street types paying to watch the ladies demean themselves to a retail manager who refuses a single mother time off to pick up her daughter from school.

Consider how frequently films feature none to one female character. The “Hobbit” trilogy needed to create an entirely new character just to add some female representation to the story. “Hustlers” has no obligation to show that some men are OK. Decades of Hollywood history provide enough examples of that.

This one has no short supply of charming characters: Cardi B’s brief appearance as Diamond; Mercedes, who sometimes can’t hack the job and literally runs away; and Annabelle has a weak stomach. Even Julia Stiles does her job well as reporter Elizabeth – a fictionalized version of New York magazine’s Jessica Pressler, who wrote “The Hustlers at Scores,” the basis for the movie – interviewing those involved throughout the film. 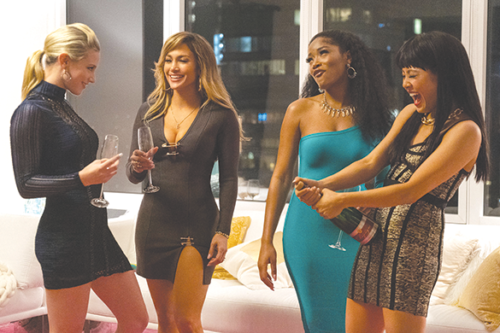 Primary lead Wu, however, is a different case. Unlike her charming and quite memorable role in “Fresh Off the Boat,” Destiny is a blank slate, similar to her performance in “Crazy Rich Asians.” She enters a new strip club insecure in her own skin. She eventually blossoms, but she never quite goes all in, far more cautious than Ramona.

This hesitance doesn’t quite match certain aspects of her character. When the reporter asks about the drugs slipped into men’s drinks – an entire scene reveals their efforts to get the ingredients just right – Destiny, also named Dorothy, is rather cavalier. Such normalization of something like this should probably translate into other characteristics that go unexplored.

That’s of little consequence next to J. Lo, the real star here. The singer-dancer-actor-entrepreneur has a long cinematic history, albeit an uneven one. With only a Golden Globe nom to date for “Selena” and praise for her role in “Out of Sight,” she’s due. “Hustler” will easily help her earn another nom in the comedy category. As for Oscar praise, it’s hard to tell.

“Hustlers” is a compelling story featuring some truly audacious moments that really happened. Besides that, director Lorene Scafaria’s (“Seeking Friends at the End of the World”) third theatrical feature is a home run. Chemistry amongst these anti-heroines is rich, topped with authentic emotion and a smoothly structured story that works incredibly well.