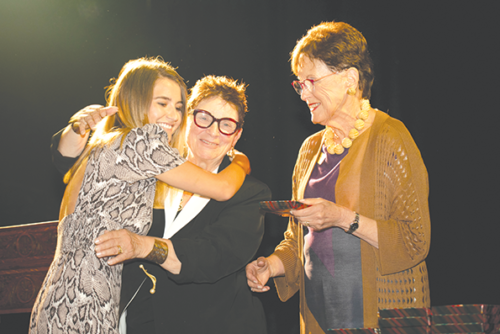 Amanda Hyatt accepts her scholarship from the Ebell’s Director of Scholarship Judith Day and President Ginger Barnard on Sept. 12. (photo courtesy of the Ebell of Los Angeles)

On Sept. 12, the Ebell of Los Angeles celebrated 100 years of its scholarship program and honored its 2019-20 recipients at the group’s historic building on Wilshire Boulevard.

In a courtyard pre-dinner ceremony, local officials and their representatives praised the 125-year-old organization, which was founded by and mostly consists of women, for its philanthropy and long-tenured success.

“Whether it’s supporting the arts, empowering new voices and fresh ideas, or helping those suffering from homelessness, the Ebell has been our city’s oldest and most lasting force for good,” said Los Angeles City Councilman David Ryu, 4th District.

The program began in 1919 with only $1,005.50, which was used to help seven girls stay in high school by giving them $10 per month during the school year. Eight years later, Mr. and Mrs. Charles N. Flint created a $40,000 endowment for the scholarship program, though the money came with the stipulation that men be included as scholarship recipients as well. As of 2019, the program has given away more than 4,000 grants totaling more than $9 million, the Ebell’s Director of Scholarship Judith Day said.

“Every time I say that, it kind of blows my mind,” she added.

The Ebell Scholars, who are chosen based on their academic performance, personal character and demonstrated need, can keep their scholarship – which is $5,000 for four-year schools and $3,000 for community colleges – for up to three years, as long as they remain enrolled full-time in classes and maintain a 3.25 grade point average or better.

Unlike other scholarships that send money to the schools to offset tuition, room and board, and other costs, the Ebell Scholars receive their money directly, allowing them to use it how they see fit. In some cases, that’s allowed the students to study abroad, Day said, and other times, they use the money for living expenses or other needs.

The scholarship program offers more than just money, however.

Ebell Scholar Navid Hariri, an information systems major at California State University, Northridge, said the scholarship made paying for school easier, but it has other benefits as well.

“I feel like I’m part of the family now. I feel like if there’s something going on, I could call someone and ask them questions,” Hariri said.

Ebell Scholar Mia Moreno, an anthropology major at Santa Monica College who hopes to attend medical school, agreed that the money is very helpful, allowing her to “focus more on my education rather than having to worry and stress about financial [concerns].”

“It’s also an awesome networking opportunity to meet like-minded people. And also, this is funded by women, so to have that support system is awesome,” Moreno said.

To celebrate the scholarship program’s century mark, the Ebell gathered stories from as many past recipients that could be located. More than 100 people dating back almost 60 years responded with how the program allowed them to pursue higher education and make an impact.

When awarding a City Council resolution to the Ebell, Ryu praised the program and encouraged the scholarship recipients to give back to the community.

“The recipients tonight will join the ranks of some of the greatest minds and leaders in Los Angeles history,” Ryu said. “So no pressure to the scholarship recipients, but we look forward to all of what you will do and everything you will accomplish, but more importantly, what you will do to give back to your community and to the Ebell and to the city.”

With a strong track record of success, Day said she thinks the program shows no signs of slowing down anytime soon.

“I have no doubt the women of the Ebell will keep this going another hundred years,” Day said.

‘We’re more resilient than ever before’