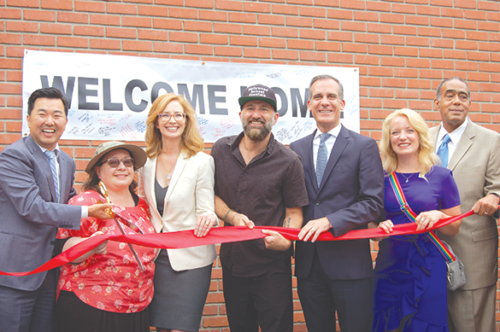 Mayor Eric Garcetti joined Ryu and numerous city officials, representatives from agencies serving homeless individuals, and community members in celebrating the new 30-bed facility for women. It marked the end of a multi-year process to have the long-vacant city building converted into housing. The structure formerly housed the Will and Ariel Durant Branch Library before it moved to a location on Sunset Boulevard nearly two decades ago.

“The Gardner Street Women’s Bridge Housing Center is more than beds and services. It is the product of a city and a community working hand in hand,” Ryu said. “It is the proof that when we listen to each other, trust one another and work together toward a common solution, we can build something that works and something that lasts.”

The facility is one component in a multi-pronged approach to ending homelessness as permanent housing is being constructed throughout the city. Garcetti highlighted his A Bridge Home program, which is also part of the solution to homelessness. Under A Bridge Home, temporary shelters are being constructed to house homeless individuals for periods of approximately three years. The Gardner Street facility will permanently serve women experiencing homelessness.

“A Bridge Home is saving lives by getting homeless Angelenos indoors now as new, long-lasting supportive and affordable housing is being built,” Garcetti said. “The Gardner Library site is the latest milestone in this work and will provide 30 beds for unsheltered women in Hollywood, as well as the healing services and hope they urgently need and deserve.”

The facility will be operated by the Weingart Center, a nonprofit contracting with the city to provide services for homeless individuals such as job training, counseling and more. The building was renovated over the past year to include places to sleep, communal spaces, offices for staff, a laundry room, a kitchen and dining area. The facility will have 24-hour security. Amenities from the former library, including shelves and the circulation desk, were restored and included in the new facility. 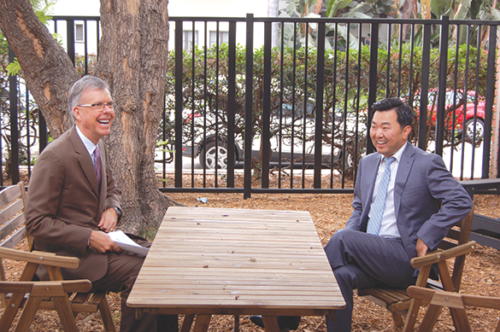 Councilman David Ryu (right) and Los Angeles City Engineer Gary Lee Moore relaxed in the courtyard during a tour of the new bridge housing center on Gardner Street. The facility was created in a building that formerly housed a library. (photo by Edwin Folven)

The women to be served at the center were selected by the Los Angeles Homeless Services Authority and will move in next Monday. The goal is for them to stay between 90 days to two years while permanent housing is secured. With a rotating pool of clients, the shelter will potentially serve countless women in the future, according to Ryu spokesman Mark Pampanin. The center will have female staff members, making it a facility of women serving women, he added.

“It will be serving people directly from our community, as well as people from the city at large,” Gold said. “The community supports it. We want to do more to help the homeless, we want to volunteer and we want to do whatever is necessary to help.”

“Hope is the key word in everything we do here.” she said. “This right here gives hope to people in the community that they can get out of homelessness.”

The Gardner Street Women’s Bridge Housing Center was created using $1.8 million in Measure HHH funds. The work to restore the site was completed by crews from the city’s Bureau of Engineering, Bureau of Sanitation and General Services Department.

The Gardner Street Library that has been vacant since 2003 might appear to have been converted into a womens shelter but the plumbing most certainly would not pass inspection because the entire place smells of nasty sewer.
WOW!!!